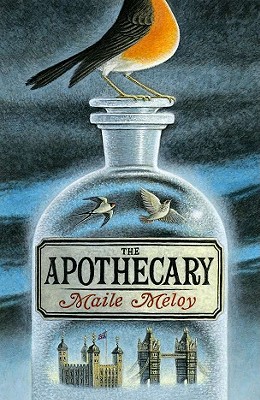 It's 1952 and the Scott family has just moved from Los Angeles to London. Here, fourteen-year-old Janie meets a mysterious apothecary and his son, Benjamin Burrows - a fascinating boy who's not afraid to stand up to authority and dreams of becoming a spy. When Benjamin's father is kidnapped, Janie and Benjamin must uncover the secrets of the apothecary's sacred book, the Pharmacopoeia, in order to find him, all while keeping it out of the hands of their enemies - Russian spies in possession of nuclear weapons. Discovering and testing potions they never believed could exist, Janie and Benjamin embark on a dangerous race to save the apothecary and prevent impending disaster.
Together with Ian Schoenherr's breathtaking illustrations, this is a truly stunning package from cover to cover.

Praise For The Apothecary…

Maile Meloy is the author of the story collection "Half in Love," and the novels "Liars and Saints," shortlisted for the 2005 Orange Prize, and "A Family Daughter." Meloy s stories have been published in "The New Yorker," and she has received "The Paris Review s" Aga Khan Prize for Fiction, the PEN/Malamud Award, the Rosenthal Foundation Award, and a Guggenheim Fellowship. In 2007, she was chosen as one of Granta s Best American Novelists under 35. She lives in California."
Loading...
or
Not Currently Available for Direct Purchase