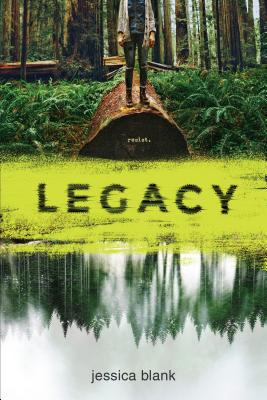 A powerful coming-of-age novel about a seventeen-year-old girl who joins a radical environmental movement in the Pacific Northwest.

Ever since her older brother Andy died, Alison's life has been just as dark as her home in Tacoma, Washington.

Her mom is in perpetual mourning, her father ran out on them, and after hanging out with Andy's hard-partying friends for a year, Alison's reputation is trashed. She planned on taking the path of least resistance during her senior year--hanging out with her punk rocker boyfriend and trying not to flunk out of school--until a massive fight with her mother pushes her over the edge, and she runs away.

At first, joining a group of radical environmentalists who are occupying a Washington State forest is just about having a place to crash. But the ancient woods prove to be as vibrant and welcoming as they are vulnerable, and for the first time, Alison realizes that she might be more powerful than she thought. As tensions in the forest mount and confrontations with authorities get physical, Alison has to decide whether she's willing to put her own life on the line to fight for what she believes in.

In this stunning literary work, Jessica Blank uses the anti-establishment and radical mood of the 1990s to show a girl grappling to find the strength and courage to do what's right . . . for the world . . . and for herself.

"Girl power and the right of resistance of the 1990s make this book a relevant choice for readers looking to have a say in the world and affect change." —School Library Journal

"Although it takes place in the ‘90s, the message of environmental activism is just as timely and important today." —VOYA

"When [Alison] and Jeff join a Free State, an activist community of people trying to save old-growth Douglas fir trees from being cleared, she finally feels a part of something larger than herself. Even as relationship problems and tragedy plague Alison and her allies, they stay committed to their purpose." —Kirkus Reviews

"Set in the ’90s just before its contemporary YA readers were born, Blank’s compact novel is a fast-moving quick pick that will bridge fandoms of angsty teen drama and social cause." —BCCB

Jessica Blank wrote the YA novels Almost Home and Karma For Beginners, and is an actor, writer, and director for film, television, and theater. With her husband Erik Jensen, she wrote the plays The Exonerated, Aftermath, and How to Be a Rock Critic, as well as the film version of The Exonerated. They adapted and co-directed the feature film version of Almost Home, slated for release in 2018. You can find her at www.jessicablankcoaching.com
Loading...
or
Not Currently Available for Direct Purchase