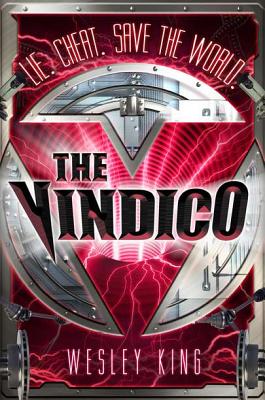 X-Men meets The Breakfast Club in this darkly humorous adventure

The Vindico are a group of supervillains who have been fighting the League of Heroes for as long as anyone can remember. Realizing they're not as young as they used to be, they devise a plan to kidnap a group of teenagers to take over for them when they retire--after all, how hard can it be to teach a bunch of angsty teens to be evil?

Held captive in a remote mansion, five teens train with their mentors and receive superpowers beyond their wildest dreams. Struggling to uncover the motives of the Vindico, the teens have to trust each other to plot their escape. But they quickly learn that the differences between good and evil are not as black and white as they seem, and they are left wondering whose side they should be fighting on after all . . .

With fast-paced action, punchy dialogue, and sarcastic humor, this high-stakes adventure from a talented new YA voice pulls you in from the first page.

Wesley King lives in suburban Oshawa, Ontario, Canada, where he spends most of his time in imagined universes of superpowered children, dying stars, and dystopian fantasy realms. This is his first novel.

"King brilliantly combines teenage points of view and emotions with comic book excitement in this superbly composed tale of superheroes and super villains. Readers get to know each of the five teens through their distinctive voices and personalities and can easily follow their motivations as they struggle to make the impossible decision of how to use their newfound powers. There is nonstop action as the teens learn how to use their powers with and against their villain mentors that will keep readers engaged and excited throughout the book. This is an excellent addition to any library serving teens, as it will appeal to reluctant readers with its fast-paced action, and almost all teen readers will love the comic book feel of this book."

"[King's] teens are vivid, funny, and relatable, but their growth never comes at the expense of story or plot development. Add in descriptions of cool weaponry and superpowers, a healthy dose of clever one-liners and snappy dialogue, and plenty of chases and explosions, and you’ve got all the ingredients for a hit series that teens will love. King is definitely an author to watch."

"Here’s a debut that will knock middle-grade superhero fans on their butts. In a fresh twist, five ordinary teens are recruited to learn superhuman powers—by the villains . . . By minimizing the numbing action scenes so common to this sort of book and focusing instead upon the interplay of the witty, appealing kids, King deepens the reader’s experience by turning each character—yes, even the Torturer!—into more than the typical black-and-white placeholder . . . kids are going to gobble this up."

"With the Vindico characters’ backstories, King grays the line between good and evil even further . . . he never loses his knack for humorous—and teen-friendly—dialogue, e.g., “If you turn a bunch of kids into supervillains, you can’t expect them to follow the rules.”"