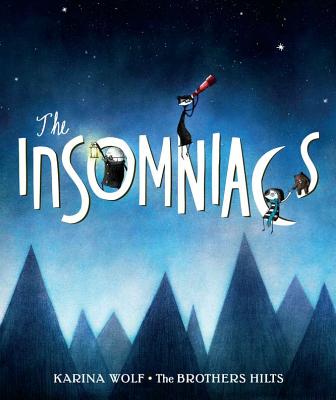 The wonder of nighttime comes to life in this breathtaking debut

When the Insomniacs move twelve time zones away for Mrs. Insomniac's new job, the family has an impossible time adapting to the change. They try everything to fall asleep at night--take hot baths, count to one thousand, sip mugs of milk--but nothing helps. Venturing out into the dark, they learn there is a whole world still awake and a beauty in their new and unconventional schedule.

Praise For The Insomniacs…

"Reminiscent of the work of Edward Gorey, Charles Addams, and a certain Tim Burton-esque aesthetic, the art for this book forges its own style without feeling derivative. Full-page mixed-media (charcoal, pencil, and computer) illustrations are cleverly designed. . . . An offbeat (but satisfying) bedtime story for fans of quirky tales and nighttime adventures."

"A quietly magnificent paean to the wonder of nighttime and the solidity of a family unit. . . . What first seems an eerie, baby-goth vibe is held steady by the stable, close-knit family and lack of crisis in this atmospheric, calmly splendid piece."

"Future fans of Neil Gaiman and Dave McKean will thrill to this after-dark debut from Wolf, with shadowy illustrations by Ben and Sean Hilts. . . . Where most picture books say goodnight, this unusual entry gives the go-ahead to stay up late."

"The grainy, deeply shaded blue-and-black palette is beautifully illuminated by lanterns, the moon, creatures’ eyes, and other things that glow. . . . The characters, with their dark-rimmed eyes and spindly limbs, resemble nonscary Tim Burton creations and will speak to those who prefer their bedtime stories on the magical dark side."

Karina Wolf is a lifelong insomniac and a debut picture book author. Karina studied literature and film in New York, Paris and Dublin, and she works in television and film production. She lives in Manhattan with her dogs, Luca and Barry Manilow.

The Brothers Hilts are Ben (the older one) and Sean (the younger one). They work as a team illustrating, designing and constantly comparing to see whose ideas are better. They too are the products of an insomniac family and a long line of people who stay up late into the night. They now live and work in Cambridge, Massachusetts.
Loading...
or
Not Currently Available for Direct Purchase