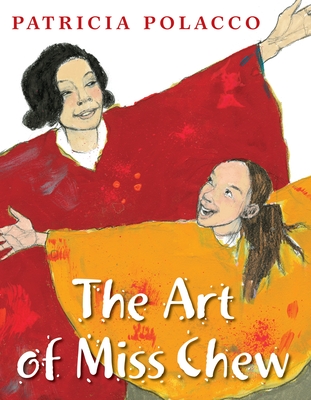 The Art of Miss Chew (Hardcover)

After spending the summer with her artist grandmother, Trisha knows she wants to be an artist, too. She's thrilled when her sketches get her into Miss Chew's special art class at the high school. A substitute teacher tells her she's wasting time on art when she should be studying - but fortunately, this is one battle that Miss Chew and Trisha are up for!

This true story shows just how important a teacher can be in a child's life - and celebrates the power of art itself.


Praise For The Art of Miss Chew…

"The joy of artistic creation and the value of teachers who are willing to look outside the box come through clearly in the first-person narrative and Polacco's fluid illustrations." — Publishers Weekly

"Full of color and movement. . . . [Polacco's] first-person narration tells her tragedy and triumph in a very down-to-earth way, using the tone of the 11-year-old she was." — Kirkus Reviews

"The moving memoir will resonate with any student who has struggled with reading and should also spark empathy among their classmates." — Booklist