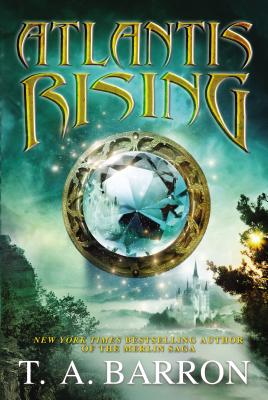 From T.A. Barron, the New York Times bestselling author of the Merlin Saga, comes a new fantasy world about the origins of Atlantis, perfect for fans of The Lord of the Rings, Eragon, The Beyonders and Percy Jackson and the Olympians. In a magical land called Ellegandia, a young boy named Promi scrapes by, stealing pies, cakes and sweets to survive. But little does he know that his country is a pawn in an ages-old war between good and evil, battled both in the spirit realm and in the human world. Harboring secrets of his own, Promi teams up with a courageous girl named Atlanta and the two vow to save their
land--and each other--no matter the cost. But their vow has greater repercussions than they ever could imagine--in fact, it may just bring about the creation of Atlantis, an island cut off from the rest of the world, where magic reigns supreme. With his trademark action, adventure, and poignancy, master of fantasy, T.A. Barron explores a new mythology--the origin of the legendary isle of Atlantis. This book is perfect for fans of Rick Riordan, Brandon Mull, Christopher Paolini and, of course, T. A. Barron's Merlin Saga. Praise for T. A. Barron's novels: "Brilliant, significant, and illuminating . . . an intense and profoundly spiritual adventure."--Lloyd Alexander "A crescendo of miracles."--Madeleine L'Engle "Interesting and august . . . compelling."--The New York Times "In the best tradition . . . classic."--Parents Magazine

T.A. Barron was a Princeton grad, a Rhodes Scholar, and a highly successful business man before he returned to his true love: books for children. He is the New York Times bestselling author of the Merlin Saga, the Heartlight Saga, Tree Girl, The Hero's Trail, and many picture books. He has also created a Young Heros Award that rewards children who are heroic in their communities with a monetary prize for their achievements. He's an environmental activist and is on the board of many corporations and charities. He lives in Boulder, Colorado, with his wife, five children, two dogs and two goats. www.tabarron.com
Loading...
or
Not Currently Available for Direct Purchase