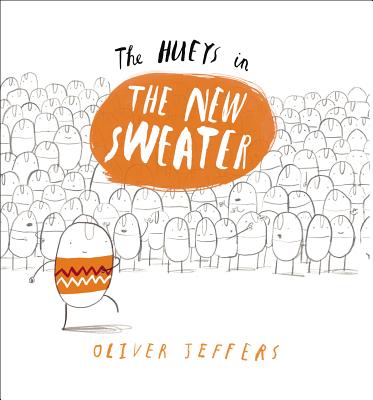 The Hueys in The New Sweater (Hardcover)

The Hueys are small and mischievous, unique compared to the world's other creatures--but hardly unique to one another. You see, each Huey looks the same, thinks the same, and does the same exact things. So you can imagine the chaos when one of them has the idea of knitting a sweater! It seems like a good idea at the time--he is quite proud of it, in fact--but it does make him different from the others. So the rest of the Hueys, in turn, decide that they want to be different too! How? By knitting the exact same sweater, of course!

The first in a series of child-friendly concept books by the #1 bestselling artist of The Day the Crayons Quit, How to Catch a Star, Stuck, and This Moose Belongs to Me, The New Sweater proves that standing apart can be accomplished even when standing together.

Oliver Jeffers (www.oliverjeffersworld.com) makes art and tells stories. His books include the #1 blockbuster The Day the Crayons Quit; How to Catch a Star; Lost and Found, which was the recipient of the prestigious Nestle Children’s Book Prize Gold Award in the U.K. and was later adapted into an award-winning animated film; The Way Back Home; The Incredible Book Eating Boy; The Great Paper Caper; The Heart and the Bottle, which was made into a highly acclaimed iPad application narrated by Helena Bonham Carter; Up and Down, the New York Times bestselling Stuck; The Hueys in the New Sweater, a New York Times Best Illustrated Book of the Year; and This Moose Belongs to Me, a New York Times bestseller. Originally from Belfast, Northern Ireland, Oliver now lives and works in Brooklyn, New York.

Praise For The Hueys in The New Sweater…

"The spare but adorable artwork makes this picture book work as a quirky diversion, but it doesn’t diminish the understated, deftly delivered lesson for those moments when kids need a nudge to help be themselves, or be OK when everyone else wants to be just like them."--Booklist, starred review — Booklist (starred review)

"The minimalist appearance of the Hueys will make them easy for kids to imitate artistically, and those who can't wait for the Hueys' next outing (jacket copy indicates this is the beginning of a series) may want to create their own Huey-themed adventures."--BCCB — Bulletin of the Center for Children's Books
or
Not Currently Available for Direct Purchase
Copyright © 2020 American Booksellers Association