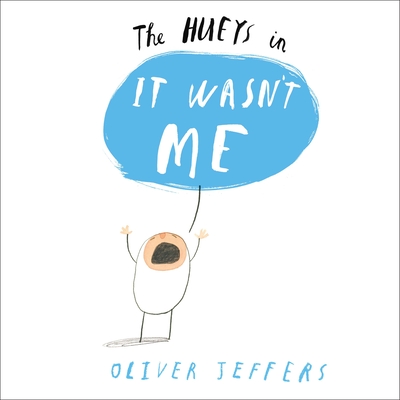 The Hueys in It Wasn't Me

What's all the arguing about? There are plenty of Hueys to go around in this hilarious story from the #1 bestselling illustrator of The Day the Crayons Quit!

The Hueys are back! Oliver Jeffers'  jelly bean-shaped creatures may look the same, think the same, and even do the same things, but that doesn’t mean they always agree. The only problem is, they can’t seem to agree on what they disagreed on in the first place! Which ultimately leads to an even bigger disagreement! Confused? Well, so are the Hueys. Which only adds to the fun and hilarity.

Anyone who has ever had to referee an argument among siblings or friends will appreciate the absurdity Oliver Jeffers reveals in the every-day trials of getting along.

Oliver Jeffers is the New York Times bestselling author/illustrator of Stuck, The Incredible Book-Eating Boy, This Moose Belongs to Me, Lost and Found, How to Catch a Star, The Heart in the Bottle (which is also a highly-acclaimed iPad app narrated by Helena Bonham Carter) and many more. He is also the ilustrator of the mega-selling The Day the Crayons Quit, written by Drew Daywalt. His books have won numerous awards, including the Nestlé Children’s Book Prize Gold Award, the Blue Peter Book of the Year, and the Irish Book Awards Children’s Book of the Year.

Praise For The Hueys in It Wasn't Me…

"Children will undoubtedly enjoy the simple, but expressive, caricatures and the childlike pencil and mixed-media compositions. They will understand the author’s humorous way of unveiling the silliness of certain conflicts. The silence at key junctures . . . will give viewers pause, too. Parents may get new ideas for conflict management under Gillespie’s cool tutelage. A worthy sequel."--School Library Journal

The companion to one of The New York Times Best Illustrated Children's Books of 2012: The Hueys in The New Sweater — Oliver Jeffers

Oliver Jeffers (www.oliverjeffersworld.com) makes art and tells stories. His books include the #1 bestseller The Day the Crayons Quit; How to Catch a Star; Lost and Found, which was the recipient of the prestigious Nestle Children’s Book Prize Gold Award in the U.K. and was later adapted into an award-winning animated film; The Way Back Home; The Incredible Book Eating Boy; The Great Paper Caper; The Heart and the Bottle, which was made into a highly acclaimed iPad application narrated by Helena Bonham Carter; Up and Down; Stuck, a New York Times bestseller; The Hueys in the New Sweater, a New York Times Best Illustrated Book of the Year; and This Moose Belongs to Me, also a New York Times bestseller. Originally from Belfast, Northern Ireland, Oliver now lives and works in Brooklyn, New York.
Loading...
or
Not Currently Available for Direct Purchase