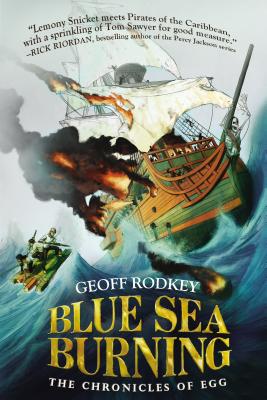 This is a rip-roaring debut I highly recommend you grab a copy The best way I can describe it is Lemony Snicket meets"Pirates of the Caribbean," with a sprinkling of"Tom Sawyer"for good measure. RICK RIORDAN, "New YorkTimes"bestselling author of the Percy Jackson series on "Deadweather and Sunrise."
After narrowly escaping the New Lands, Egg is determined to take down ruthless slave trader Roger Pembroke. But war is brewing among the Blue Sea's pirate gangs and Egg, Guts, and Kira are running out of time to find the Fire King's treasure and free the Okalu slaves from the silver mine on Sunrise. Can they save Kira's people before Sunrise is plundered by Ripper Jones's pirates? Will Burn Healy save the day, or has the legendary captain finally met his match? And will Egg ever win back Millicent from the annoyingly handsome Cyril?
This explosive conclusion to Egg's journey delivers the ultimate combination of humor, heart, and white-knuckle adventure.

Geoff Rodkey (www.chroniclesofegg.com)is the Emmy-nominated writer of such hit films as"Daddy Day Care," "RV," and the Disney Channel's"Good Luck Charlie, It's Christmas." He grew up in Freeport, Illinois and began his writing career on his high school newspaper.His early writing credits include the educational video game"Where In the World Is Carmen Sandiego?"andthe non-educational MTV series"Beavis and Butthead." Geoff currently lives in New York City with his wife and three sons. They do not have any pets, mostly because the whole experience with the goldfish was just too upsetting."

Praise for DEADWEATHER AND SUNRISE (Book One in the Chronicles of Egg series):