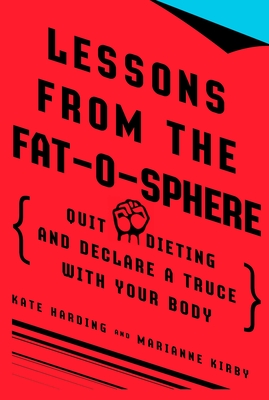 Lessons from the Fat-o-sphere

Quit Dieting and Declare a Truce with Your Body

From the leading bloggers in the fat-acceptance movement comes an empowering guide to body image- no matter what the scales say.

When it comes to body image, women can be their own worst enemies, aided and abetted by society and the media. But Harding and Kirby, the leading bloggers in the "fatosphere," the online community of the fat acceptance movement, have written a book to help readers achieve admiration for-or at least a truce with-their bodies. The authors believe in "health at every size"-the idea that weight does not necessarily determine well-being and that exercise and eating healthfully are beneficial, regardless of whether they cause weight loss. They point to errors in the media, misunderstood and ignored research, as well as stories from real women around the world to underscore their message. In the up-front and honest style that has become the trademark of their blogs, they share with readers twenty-seven ways to reframe notions of dieting and weight, including: accepting that diets don't work, practicing intuitive eating, finding body-positive doctors, not judging other women, and finding a hobby that has nothing to do with one's weight.

Kate Harding is an accomplished writer. She is the author of Asking For It: The Alarming Rise of Rape Culture—and What We Can Do About It. Previously, she collaborated with Anna Holmes, Amanda Hess, and a cast of thousands on The Book of Jezebel, and with Marianne Kirby on Lessons from the Fat-o-Sphere. Harding's essays have appeared in the anthologies Madonna & Me, Yes Means Yes, Feed Me, and Airmail: Women of Letters. She holds an MFA in fiction from Vermont College of Fine Arts and a BA in English from University of Toronto, and is currently at work on a PhD in creative writing from Bath Spa University.

Marianne Kirby is a writer, editor, and activist. She frequently contributes to women’s interest publications, news outlets, and television shows. She has been published by the Guardian, xoJane, the Daily Dot, Bitch Magazine, Time, and others. Kirby has appeared on TV and radio programs ranging from the Dr. Phil show to Radio New Zealand.
Loading...
or support indie stores by buying on