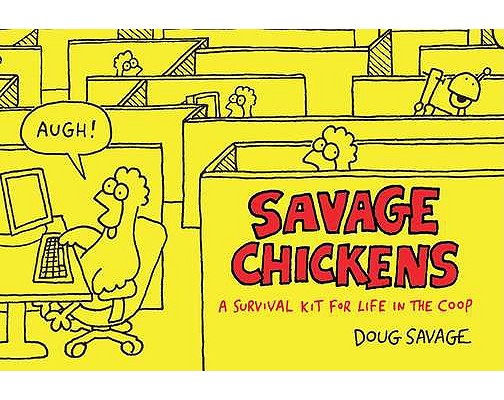 A Survival Kit for Life in the Coop

"As a vegan, the only chickens I consume are Savage's. I never miss a meal."-Dan Piraro, cartoonist of Bizarro
We've all been forced to endure jobs we don't like. We get up, go to work, go to bed, and do it again. No one knows these pains better than Doug Savage, whose dream of being a cartoonist was eclipsed by his ho- hum office job. That is, until he started doodling chicken cartoons on Post-its and turned them into one of the Internet's most popular cartoon blogs.
"Savage Chickens" is a collection of cartoons starring Doug's beloved chickens and their officemates that will get a laugh out of even the most jaded number-crunching colleague. Doug blends cynicism, optimism, and interactive activities to create a portable pep talk for the overworked and underappreciated that will keep you sane-and amused- during the morning bus ride, the meeting-filled Monday, the tenth load of laundry, the bathroom break, or the red-eye to the coast.