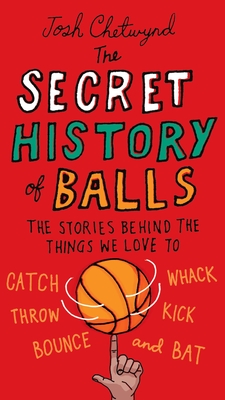 The Secret History of Balls (Paperback)

The Stories Behind the Things We Love to Catch, Whack, Throw, Kick, Bounce and B at

You may fancy yourself a sports fan, but chances are you don't know:

Balls are the unsung heroes of sports. They are smacked, flung, dribbled, crushed, thrown, and kicked. They're usually only the subject of scrutiny when something goes wrong: a tear, the application of an illegal foreign substance, or a dent from overuse. Nevertheless, if you're watching nearly any major sporting event from around the world, you're likely following the ball wondering where it will go next...

The Secret History of Balls mines the stories and lore of sports and recreation to offer insight into 60 balls-whether they're hollow, solid, full of air, or stuffed with twine or made of leather, metal, rubber, plastic, or polyurethane-that give us joy on playing fields and in every arena from backyards to stadiums around the globe.

Josh Chetwynd is a journalist, broadcaster, and author. He has served as a staff reporter for USA Today, the Hollywood Reporter, and U.S. News & World Report, and his writing has also appeared in such publications as the Wall Street Journal, the Times (London), the Harvard Negotiation Law Review, and Variety. As a broadcaster, he has worked for BBC Radio, among other outlets. In terms of his sports bona fides, he primarily earned them on the baseball diamond, where he played at the NCAA Division I college level for Northwestern University and had professional stints in both the United States for the Zanesville Greys in the independent Frontier League, and abroad for Sweden's Oskarshamn BK in Europe. He is the author of six books, four of them about sports. His 2011 effort, The Secret History of Balls: The Stories Behind the Things We Love to Catch, Whack, Throw, Kick, Bounce, and Bat, was named an NPR best book that year. He lives in Denver, Colorado, with his wife and two children.
or
Not Currently Available for Direct Purchase
Copyright © 2020 American Booksellers Association