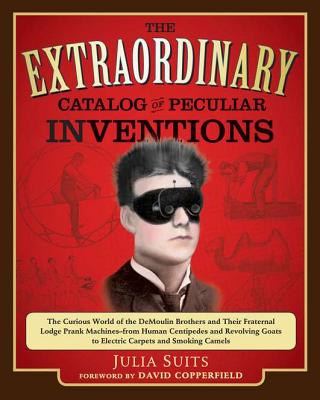 The Extraordinary Catalog of Peculiar Inventions

""This stuff is more than just fancy pranks. It's Americana. Never has nonsense been taken so seriously...This book is a fascinating, appetite- whetting glimpse for the, if you'll pardon the expression, uninitiated.""
-David Copperfield, from the foreword

At the beginning of the twentieth century, 40 percent of American men belonged to a lodge, and they were hazing their newbies with cigar- smoking camels, spankers, and even fake guillotines. Nearly all their prank devices came from the same place: catalogs published by the DeMoulin Brothers Company from 1896 to 1930.

Julia Suits discovered one of these all-but-forgotten catalogs at a flea market. Its pages were full of bizarre hazing props: old-fashioned telephones that squirted water, bucking goats attached to tricycles, Victorian- looking furniture that sent electric shocks. These prank machines are the relics of mischief and daredevilry, produced for the country's original fraternity- hazing culture, and created by America's original high-tech geeks of the electric age.

"The Extraordinary Catalog of Peculiar Inventions" offers a peek into twentieth-century American culture that most people have never seen. At its core are hundreds of the most inventive DeMoulin prank machines, complete with their original, quirky descriptions and eccentric line art. Alongside the catalog pages are newspaper clippings, lodge trivia, quotes, and stories that show the true side of America's original hazing culture.

Julia Suits is a "New Yorker" cartoonist and freelance illustrator.