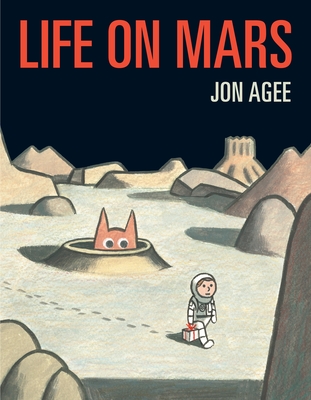 In this sneaky, silly picture book for fans of Oliver Jeffers and Jon Klassen, an intrepid—but not so clever—space explorer is certain he’s found the only living thing on Mars

A young astronaut is absolutely sure there is life to be found on Mars. He sets off on a solitary mission, determined to prove the naysayers wrong. But when he arrives, equipped with a package of cupcakes as a gift, he sees nothing but a nearly barren planet. Finally, he spies a single flower and packs it away to take back to Earth as proof that there is indeed life on Mars. But as he settles in for the journey home, he cracks open his cupcakes—only to discover that someone has eaten them all!

Readers will love being in on the secret: Unbeknownst to the explorer, a Martian has been wandering through the illustrations the whole time—and he got himself a delicious snack along the way.

Praise For Life on Mars…

Praise for Life on Mars

“We are made hopeful by fresh questions and mysteries about our ultimately unknowable and inexhaustibly interesting universe . . . [The book] invites us to be fearless with our faults and bold in our explorations, and to remember that wonder is never withdrawn.” —New York Times Book Review

“Jon Agee excels at creating picture books with unusual settings and characters . . . For young readers, this book serves as a great introduction to the kinds of books where the reader knows more information than the main character does.” —The Huffington Post

* "The humor continues through the very last page. Agee, with his unique and winning view of the world, never talks down to children and always asks readers to slow down and enjoy his take on what they might not otherwise see." —Horn Book, starred view

* "Sure to be a hit with beginning readers and storytime audiences alike." —School Library Journal, starred review

"Satisfying silliness from start to finish, with a gotcha ending that will prompt requests for repeat readings."—Publishers Weekly

"There's plenty of humor in the contrast between Agee's text and pictures, and that skittish martian is a hoot all on its own. Little ones who lost it over Jon Klassen's I Want My Hat Back will likely appreciate Agee's guileless astronaut." —Booklist

“The words tell one story and the pictures another in this charming tale from master picture book creator Jon Agee...Out of this world.” —BookPage

Jon Agee is the beloved author and illustrator of many acclaimed picture books, including Terrific (a New York Times Best Illustrated Book), Milo’s Hat Trick (an ALA Notable Book), Little Santa (an ALA Notable Book and recipient of five starred reviews), and It’s Only Stanley (a Boston Globe-Horn Book Award Honor Book). He lives in San Francisco, California.
Loading...
or support indie stores by buying on