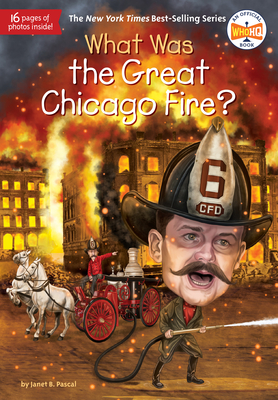 What Was the Great Chicago Fire? (What Was?)

Did the Great Chicago Fire really start after a cow kicked over a lantern in a barn? Find out the truth in this addition to the What Was? series.

On Sunday, October 8, 1871, a fire started on the south side of Chicago. A long drought made the neighborhood go up in flames. And practically everything that could go wrong did. Firemen first went to the wrong location. Fierce winds helped the blaze jump the Chicago River twice. The Chicago Waterworks burned down, making it impossible to fight the fire. Finally after two days, Mother Nature took over, with rain smothering the flames. This overview of a stupendous disaster not only covers the fire but explores the whole history of fire fighting.

Janet Pascal is the Executive Production Editor at Viking Children's Books and the author of Who Was Dr. Seuss?, Who Was Abraham Lincoln?, What Is the Panama Canal?, and What Was the Hindenburg?
Loading...
or support indie stores by buying on