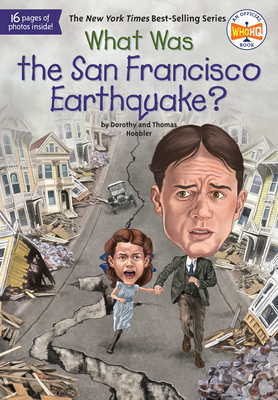 What Was the San Francisco Earthquake? (What Was?)

In this addition to the What Was? series, kids will experience what it was like to be in San Francisco in 1906 when the ground buckled in a major, catastrophic earthquake.

One early April morning in 1906, the people of San Francisco were jolted awake by a mammoth earthquake—one that registered 7.8 on the Richter Scale. Not only was there major damage from the quake itself but broken gas lines sparked a fire that ravaged the city for days. More than 500 city blocks were destroyed and over 200,000 people were left homeless. But the city quickly managed to rebuild, rising from the ashes to become the major tourist destination it is today. Here's an exciting recount of an incredible disaster.

Dorothy and Thomas Hoobler have written many books for children and young adults, including Where Are the Great Pyramids? Their YA mystery, In Darkness, Death, won the Edgar Award.


Ted Hammond is a Canadian artist who has been creating illustrations for over twenty years and his artwork has appeared in everything from magazines, graphic novels and children books!
Loading...
or support indie stores by buying on