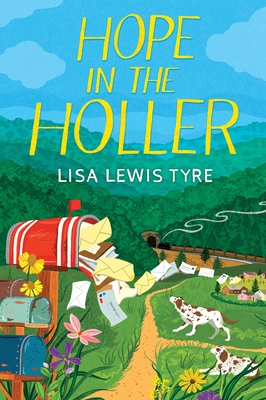 Hope in The Holler

* "This is a masterpiece of middle grade fiction, at once summoning the timelessness of life in rural America while blending in modern elements."--School Library Journal, starred review

The poignant--and funny--story of a girl trying to be brave and find her place in the world after she's sent to live with scheming relatives.

Right before Wavie's mother died, she gave Wavie a list of instructions to help her find her way in life, including this one: Be brave, Wavie B! You got as much right to a good life as anybody, so find it! But little did Wavie's mom know that events would conspire to bring Wavie back to Conley Hollow, the Appalachian hometown her mother tried to leave behind. Now Wavie's back in the Holler--and in the clutches of her Aunt Samantha Rose. Life with the devilish Samantha Rose and her revolting cousin Hoyt is no picnic, but there's real pleasure in sleeping in her own mother's old bed, and making friends with the funny, easygoing kids her aunt calls the "neighborhood-no-accounts." With their help, Wavie just might be able to prevent her aunt from becoming her legal guardian, and find her courage and place in the world.

Praise For Hope in The Holler…

* “This is a masterpiece of middle grade fiction, at once summoning the timelessness of life in rural America while blending in modern elements. . . . Wavie’s sincere narration and upbeat optimism carry her through the dark mysteries surrounding Conley Holler, and her close friendships with Gilbert and Camille are reminiscent of the young leads in J.K. Rowling’s wizarding novels. Meanwhile, Samantha Rose is a devious villain worthy of a Roald Dahl novel. . . . With well-written prose, a masterfully realized world, and characters that linger long after the novel closes, this is a must-purchase.”—School Library Journal, STARRED REVIEW

* “Wavie has a delightfully memorable first-person voice that includes pithy observations. . . . She’s so engaged with the people around her that her perceptions breathe full life into a range of characters. . . . A moving and richly engaging tale of despair and redemption.”—Kirkus Reviews, STARRED REVIEW

“Anyone who’s spent time in the holler will recognize Conley Hollow, from its ramshackle double-wides to the old graveyard to the creek, all depicted with tenderness. . . . There’s much to savor: family secrets, budding friendships, and the never-extinguishing love of a mother for her daughter. A touching sophomore effort in which everyone is kin of one sort or another.”—Booklist

Lisa Lewis Tyre also wrote Last in a Long Line of Rebels. She grew up in the tiniest of towns in Tennessee, and she now lives in Atlanta, Georgia, and works in Advertising/Social Media consulting.
Loading...
or
Not Currently Available for Direct Purchase