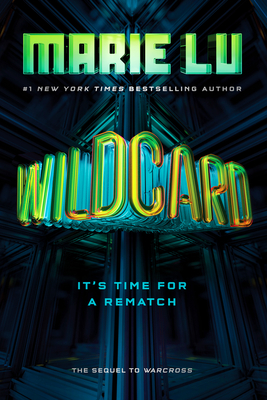 “Wildcard picks up exactly where Warcross left off. Emika has uncovered Hideo's evil plan and now she's determined to stop him. But while she can trust her Phoenix Rider friends, she isn't sure what to make of Zero. Wildcard is a non-stop action, adventure, science fiction thrill ride! In both the real world and the virtual there's barely a moment to pause and catch your breath.”
— Jennifer Jones, Bookmiser, Roswell, GA
View the List

Return to the immersive, action-packed world of Warcross in this thrilling sequel from #1 New York Times bestselling author Marie Lu

Emika Chen barely made it out of the Warcross Championships alive. Now that she knows the truth behind Hideo's new NeuroLink algorithm, she can no longer trust the one person she's always looked up to, who she once thought was on her side.

Determined to put a stop to Hideo's grim plans, Emika and the Phoenix Riders band together, only to find a new threat lurking on the neon-lit streets of Tokyo. Someone's put a bounty on Emika's head, and her sole chance for survival lies with Zero and the Blackcoats, his ruthless crew. But Emika soon learns that Zero isn't all that he seems--and his protection comes at a price.

Caught in a web of betrayal, with the future of free will at risk, just how far will Emika go to take down the man she loves?

In this explosive sequel to the New York Times bestselling Warcross, Marie Lu delivers an addictive finale that will hold you captive till the very last page.

★ "Lu’s futuristic world, with its immersive technology, feels dangerously within reach in this action-packed escapade with a thoughtful, emotion-driven core."—Publishers Weekly, starred review

★ "The plotting is exquisite, with tiny details connecting back to the first book, big twists that never feel forced, and emotional power drawn from character growth. The flawlessly rendered characters anchor the sophisticated themes and world-altering stakes right up to the end game. A fast, intense, phenomenal read."—Kirkus Reviews, starred review

"There’s plenty of high-stakes double-crossing here, and this finale moves along at a breakneck clip. Series fans will be only too happy to zoom along for the ride."—Booklist

"Fans of Warcross will enjoy even more time spent in the game, along with intrigue, action, and mystery."—School Library Journal

“A vibrant, action-packed shot of adrenaline. Lu delivers characters with heart and determination, then sets them loose in a luminously conceived world of infinite possibility.”—Leigh Bardugo, #1 New York Times bestselling author of Six of Crows

“Marie Lu’s Warcross is unlike anything I’ve ever read—clever, smart, romantic—yet exploding with color, action, and unrelenting speed. I flew through this book—it’s absolutely fantastic.”—Sabaa Tahir, #1 New York Times bestselling author of An Ember in the Ashes

“Clear your schedule, because you won’t stop reading Warcross until you’re done. Addictive, fast-paced, and totally immersive, this book takes you from a futuristic Tokyo on a high-tech tour of incredible virtual worlds. Packed with danger, intrigue, and heart-pounding gameplay, set in a world built with an incredible eye for detail, Warcross is Marie Lu’s best book yet.”—Amie Kaufman, New York Times bestselling author of Illuminae

“An immersive world that I didn't want to leave. Warcross is pure genius. I'm ready for the sequel!”—Kami Garcia, #1 New York Times bestselling coauthor of Beautiful Creatures and author of The Lovely Reckless

“The novel is a page-turner, and even those who are not gamers will cheer for Emi as she tries to discover who is genuine and who is not.”—VOYA

“[A]n inventive first in a series that showcases Lu’s versatility as a storyteller. . . . Dystopia, dark fantasy, and now a sci-fi thriller—what can’t Lu do? Her boatloads of fans can’t wait to find out.”—Booklist

"Warcross is the kind of all-consuming fantasy novel that pulls you head-first into a brand new world that begins to feel so familiar you can’t wait to get your hands on the next one."—New York magazine

Marie Lu is the #1 New York Times bestselling author of The Young Elites series, as well as the blockbuster bestselling Legend series. She graduated from the University of Southern California and jumped into the video game industry as an artist. Now a full-time writer, she spends her spare time reading, drawing, playing games, and getting stuck in traffic. She lives in Los Angeles with her illustrator/author husband, Primo Gallanosa, and their dogs.
Loading...
or support indie stores by buying on