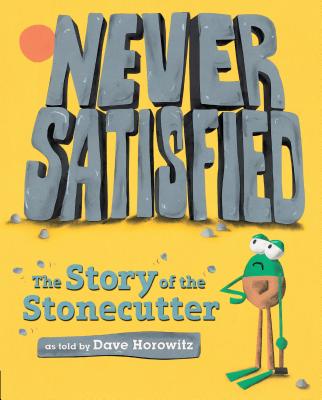 The Story of The Stonecutter

A hilarious story about thinking the grass is greener somewhere else

Have you ever wished you were someone else? Stanley the stonecutter has, because cutting stones is hard work for a frog! So Stanley wishes he could have it easy like the tea-drinking businessman . . . and, boom, he's transformed. Then he decides he'd be better off as the majestic king. But even that isn't good enough when he sees the radiant sun. Why, if he were the sun, everyone would look up to him, right? Hmm, will Stanley ever be satisfied?
Dave Horowitz's fantastic collage illustrations bring this classic folktale to hilarious life as Stanley's endless comparisons bring him full circle. Maybe being yourself is not half bad after all!

Praise For Never Satisfied: The Story of The Stonecutter…

“Careful-what-you-ask-for story based on a Chinese folktale. . . . Horowitz’s (Humpty Dumpty Climbs Again) cut-paper art has a broad, sculptural quality . . . the pictures have a visual immediacy and narrative velocity. The pages breeze by until Stanley’s final transformation, which conveys a zenlike message about finding peace in one’s lot in life.”—Publishers Weekly

Dave Horowitz (horowitzdave.com) grew up in Smithtown, New York. He studied coloring at a famous art college in Rhode Island, played drums in Oregon, worked in New York City, and was a professional rock climber. Now he lives in New York's Hudson Valley, where he's just trying to be a mensch. Five Little Gefiltes is one of several books he has written. Others include Beware of Tigers, The Ugly Pumpkin, and Soon, Baboon, Soon.
Loading...
or
Not Currently Available for Direct Purchase