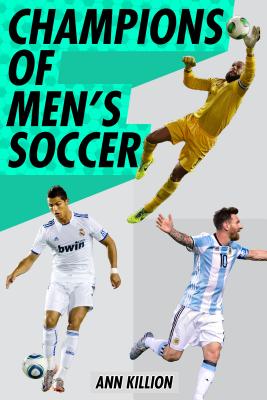 Just in time for the World Cup! From Pele to Messi to Tim Howard, here is the ultimate guide to Men's Soccer for young sports fans from an award-winning sports journalist.

From fields all across the United States to the streets of South America to pitches in Europe and Asia, the global passion and love for soccer knows no borders. It is simply the most popular sport in the world. Giants of the game like Cristiano Ronaldo, Tim Howard, and Lionel Messi have become international celebrities and role models to young fans across the globe. And as soccer continues to expand in America, with the growth of leagues like Major League Soccer and the rise in popularity of the US Men's Olympic team, there's no doubt that it's the fastest-growing sport in the United States.

Featuring Top Ten Lists and stunning photos of history-making moments, this comprehensive men's pro soccer collection catalogs the greatest international players such as Cristiano Ronaldo, Lionel Messi, and Pelé; the greatest Americans, including Tim Howard, Landon Donovan, and Clint Dempsey; the future class of superstars; and the most thrilling World Cup and Olympic matches. Here is the ultimate guide to men's soccer for young sports fans.

Praise for Champions of Men's Soccer:

Praise For Champions of Men's Soccer…

Praise for Champions of Men's Soccer:

Ann Killion has covered American sports for more than a quarter century. An award-winning columnist for the San Francisco Chronicle, she has covered several World Cups and pivotal moments in the rise of both American men's and women's soccer. She was named the 2014 California Sportswriter of the Year. She is a New York Times bestselling author, having co-written Solo: A Memoir of Hope with soccer star Hope Solo. She also co-authored Throw Like a Girl with softball great Jennie Finch. She is also the author of Champions of Women's Soccer. She has two children and lives in Mill Valley California.
Loading...
or
Not Currently Available for Direct Purchase