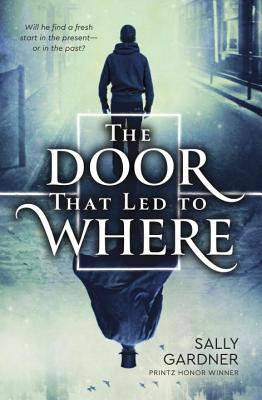 The Door That Led to Where

In this fast-paced young adult mystery, Printz Honor winner Sally Gardner brings London to life as she explores crime, poverty, and ignorance over the span of almost two centuries, as a young man is given the opportunity to go back in time in order to make sense of the present.

A fresh start is what he needs. Will he find it in the past or the present?

AJ Flynn has just failed all but one of his major exams, and at almost seventeen years old, he sees a future that’s far from rosy. So when he’s offered a junior clerk position at a London law firm, he hopes his life is about to change—and it does, but he could never have imagined how much.

While on the job, AJ finds an old key labeled with his birth date, and he’s determined to find the door it will open. When he does just that, AJ and his group of scrappy friends begin a series of amazing journeys to the past—1830, to be exact. And they quickly realize that hardship, treachery, and love haven’t changed too much in almost two hundred years.
When they discover a crime that only they can solve, the boys go from wayward youths to intrepid young men with a purpose in life. But with enemies all around, can they unravel the mysteries of the past before the past unravels them?

Praise For The Door That Led to Where…

"The characters feel universal, and many teens will . . . connect to their hopes and dreams."--SLJ

"Gardner's prose, peppered with colorful metaphors and period language, moves the plot along quickly, sketching out a pungent, vivid world in both present and past."--Horn Book Magazine

SALLY GARDNER is a multi-award-winning novelist whose Maggot Moon was a Michael L. Printz Honor Book and in the UK won both the Costa Children’s Book Award and the Carnegie Medal. Gardner’s genre-defying novel The Double Shadow received great critical acclaim and was long-listed for the Carnegie Medal. The Red Necklace (shortlisted for the Guardian Book Prize) and The Silver Blade are set during the French Revolution; the film rights for both have been purchased by Dominic West. Gardner also won the Nestlé Children’s Book Prize for her debut novel, I, Coriander. She is the author of the popular middle grade detective series Wings & Co. Visit her online at sallygardner.net and follow @TheSallyGardner on Twitter.
Loading...
or support indie stores by buying on