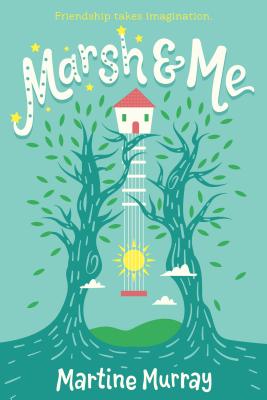 Friendship takes some imagination in this story of two kids who discover they have more in common than they knew, for fans of Stargirl.

Joey wants more than anything to talk to someone about music, to be a part of the group. But he's so shy, something always seems to get in the way. He escapes to a secret place on a hill, until one day he discovers that a strange girl has invaded the hill--and built a fort that looks like a spaceship. The hill is the one place he can be himself, so Joey decides he needs to stake his claim. He confronts the girl, whom he calls Marsh (short for Martian), and finds that she has been busy in her little makeshift "spaceship," building an imaginary world.

It's a world that hides secrets, but might also be the very thing to bring Joey out of his shell. And when Joey decides to follow Marsh home, her real life is not what he expected. But there he finds that they have music in common and he realizes that no distance is so great that music cannot bridge.

Martine Murray brings a unique friendship to life in this openhearted, imaginative tale.

Martine Murray studied law at Melbourne University, then pursued painting and joined a circus before starting a dance company called Bird on a Wire. After an injury, she began writing and illustrating books for children and young adults. Her books have been translated into seventeen languages. Her most recent book was Molly & Pim and the Millions of Stars. She lives in Castlemaine, Australia, with her daughter and dog. Visit her at martinemurray.com and follow her on Twitter at @whirlingbean.
Loading...
or
Not Currently Available for Direct Purchase