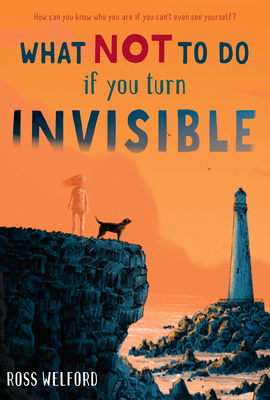 What Not to Do If You Turn Invisible

A surprising, stunningly beautiful, and funny novel about a girl who turns invisible and, in the process, discovers who she really is, from the author of TIME TRAVELING WITH A HAMSTER

Twelve-year-old Ethel Leatherhead only meant to cure her acne, not turn herself invisible. But that's exactly what happens when she combines herbs bought on the Internet with time spent in a secondhand tanning bed. At first it's terrifying to be invisible . . . and then it's fun . . . but when the effect doesn't wear off one day, Ethel is thrown into a heart-stopping adventure. With her friend Boydy by her side, Ethel struggles to conceal her invisibility, all the while unraveling the biggest secret of all: who she really is. From the talented author of Time Traveling with a Hamster comes another utterly original, deeply poignant--and humorous--novel about a girl who, by disappearing, will write herself into your heart forever.

ROSS WELFORD worked as a business journalist before becoming a freelance writer and television producer. His debut novel, TIME TRAVELING WITH A HAMSTER, was called "smart, engaging, and heartwarming" in a starred review by Booklist and was named both a New York Public Library and Bank Street College of Education Best Children's Book of the year. Follow him on Twitter at @rosswelford.
Loading...
or
Not Currently Available for Direct Purchase