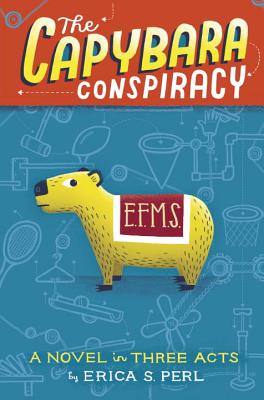 Fans of Tim Federle and Louis Sachar will love this hilarious story of what happens when the non-jocks kidnap their sports-obsessed school’s beloved mascot.

Seventh-grade playwright Olive Henry is frustrated by her middle school’s lack of appreciation for anything but sports. While the principal drones on and on during morning announcements about the sports teams’ victories, all non-athletic club meetings are relegated to the school basement, never to be mentioned on the loudspeaker. So Olive and her best friend, Reynaldo, hatch a plan to kidnap the school’s capybara mascot, planning to return it, heroically, just in time for the school’s pep rally and claim a reward: permission for their drama club to practice in the auditorium. And, hopefully, some overdue respect for the school’s non-athletes. But when an animal-rights student activist and an undercover athlete with murky motivations join in the conspiracy, their plans—along with Cappy the capybara—veer wildly out of Olive’s control.

Praise For The Capybara Conspiracy: A Novel in Three Acts…

"A delightful read that begs to be performed aloud." —School Library Journal

"Perl’s novel zips along thanks to all the back-and-forth dialogue, and is well suited to be performed. An amusing tale." —Publishers Weekly

“Funny, smart, fresh, and furry, The Capybara Conspiracy cracked me up. Move over, Macbeth. There’s a new play in town, and it’s funny! Plus, it’s got a 170-pound rodent. So put that in your beard, Mr. Bard!” —Andrea Beaty, bestselling author of Iggy Peck, Architect and Rosie Revere, Engineer

“A hilarious novel, written in play form, that is sure to inspire young actors, directors, and playwrights everywhere. Encore!” —Victoria Jamieson, author and illustrator of the Newbery Honor Book Roller Girl

“Makes a perfect classroom read-aloud or play. This fun, funny book that tackles meaningful issues in a creative way is a pure delight!” —Donna Gephart, award-winning author of Lily and Dunkin and Death by Toilet Paper

"A rallying cry for every artsy kid out there." —Jarrett J. Krosoczka, author of The Lunch Lady series

“A hilarious story celebrating our differences and the common threads that unite us. From its opening line to the final curtain call, this laugh-out-loud comedy full of clever characters and quirky drama had me hooked! Two hooves up!” —Jess Keating, author of Pink Is for Blobfish and How to Outrun a Crocodile When Your Shoes Are Untied

“The most hilarious and innovative read a young reader could hope to find. It’s a book, it’s a play, it’s a page-turning riot.” —Ned Rust, author of Patrick Griffin’s Last Breakfast on Earth

“An incredibly original, extremely clever, very funny book.  And there's a capybara in it.  What more could you possibly ask for?” —Stuart Gibbs, author of the Spy School, FunJungle and Moon Base Alpha series.

“A fresh, fun novel! It's a quirky story, told in three acts that absolutely beg to be shared out loud. Kids are going to have so much fun with this one!” —Kate Messner, author of All the Answers and The Seventh Wish

Erica S. Perl is the author of When Life Gives You O.J., Aces Wild, Vintage Veronica, and a number of picture books. She lives in Washington, D.C., where she works at First Book, the groundbreaking organization that provides books to children in need. Learn more about Erica at EricaPerl.com.
Loading...
or
Not Currently Available for Direct Purchase