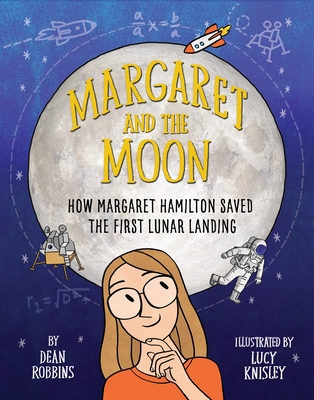 Margaret and the Moon

A true story from one of the Women of NASA!

Margaret Hamilton loved numbers as a young girl. She knew how many miles it was to the moon (and how many back). She loved studying algebra and geometry and calculus and using math to solve problems in the outside world.

Soon math led her to MIT and then to helping NASA put a man on the moon! She handwrote code that would allow the spacecraft’s computer to solve any problems it might encounter. Apollo 8. Apollo 9. Apollo 10. Apollo 11. Without her code, none of those missions could have been completed.

Dean Robbins and Lucy Knisley deliver a lovely portrayal of a pioneer in her field who never stopped reaching for the stars.

Praise For Margaret and the Moon…

"A superb introduction to the life of one girl whose dreams were out-of-this-world."—Kirkus Reviews starred review

"As the contributions of women in STEM fields gain increased attention and appreciation, Robbins and Knisley deliver an inspiring tribute to a true innovator."—Publishers Weekly starred review

Dean Robbins is a journalist and children’s book author. His previous books include Two Friends: Susan B. Anthony and Frederick Douglass, illustrated by Sean Qualls and Selina Alko, and Miss Paul and the President, illustrated by Nancy Zhang. He lives in Madison, Wisconsin, with his family. You can visit him at deanrobbins.net.


Lucy Knisley is a critically acclaimed award-winning comic creator whose previous books include the New York Times bestselling Relish: My Life in the Kitchen. She has also made comics for Marvel, Valiant Comics, and BOOM! Studios. This is her first picture book. Lucy lives in Chicago with her husband and their fluffy orange cat. See more of her work at lucyknisley.com.
Loading...
or support indie stores by buying on