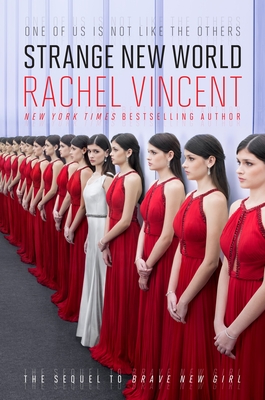 Nothing's scarier than a world where you can't be yourself. The second and final book in this high-stakes, fast-paced sci-fi series from New York Times bestselling author RACHEL VINCENT.

Dahlia 16's life is a lie. The city of Lakeview isn't a utopia that raises individuals for the greater good; it is a clone farm that mass-produces servants for the elite. And because Dahlia breaks the rules, her sisters--the 4,999 girls who share her face--are destroyed. She and Trigger 17, the soldier who risked his life for hers, go on the run, escaping into the wild outside the city walls. But it turns out Dahlia has one remaining identical, one who shouldn't even exist.

Waverly Whitmore is teenage royalty, a media sensation with millions of fans who broadcasts her every move--including every detail of her wedding planning, leading up to the day she marries Hennessy Chapman. Waverly lives a perfect life built on the labors of clones like Dahlia. She has no idea that she too is a clone . . . until she comes face to face with Dahlia.

One deadly secret. Two genetic sisters. And a world that isn't big enough for both of them.

"Thrilling and dangerous, with an ending that will leave you gasping!" --SUZANNE YOUNG, New York Times bestselling author of the series THE PROGRAM on book 1, Brave New Girl

Rachel Vincent is the New York Times bestselling author of numerous novels for teens, including Brave New Girl and its sequel, Strange New World; 100 Hours; The Stars Never Rise; and The Flame Never Dies. She lives with her family in Oklahoma.

“Thrilling and dangerous, with an ending that will leave you gasping!” —SUZANNE YOUNG, New York Times bestselling author of the series THE PROGRAM

"This perfectly paced, suspenseful, and familiar yet fresh novel will appeal to many readers, who will eagerly await its sequel." —School Library Journal

“I loved every second of it.” —The Best Books Ever
or
Buy Here
Copyright © 2020 American Booksellers Association