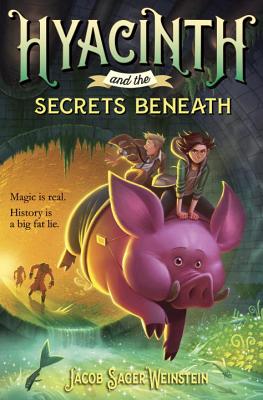 Hyacinth and the Secrets Beneath

The hilarious first book in a middle-grade fantasy trilogy about the magical rivers that run through the sewers of London and shape history in ways you'd never learn in school.

Magic is real. History is a big, fat lie.

Before Hyacinth Hayward moves from Illinois to London, she reads up on the city’s history. Too bad for her. Because the books are wrong. The truth is, London was built on magical rivers, and all the major events in its past have been about people trying to control the magic.

Hyacinth discovers this when her mom is kidnapped. In the chase to get her back, Hyacinth encounters a giant intelligent pig in a bathing suit, a boy with amnesia, an adorable tosher (whatever that is), a sarcastic old lady, and a very sketchy unicorn. Somehow Hyacinth has to figure out who to trust, so she can save her mom and, oh yeah, not cause a second Great Fire of London.

Praise For Hyacinth and the Secrets Beneath…

"A rollicking adventure with a lulu of an ending. . . . Middle graders will adore clever Hyacinth and enjoy the other humorous characters, the puns . . . and the suspenseful narrative." —Kirkus Reviews

JACOB SAGER WEINSTEIN has written for the New Yorker, McSweeney’s, HBO, and the BBC. He lives in London with his family, close to where the Westbourne flows underground, but his bathroom faucet mixes hot and cold water nonetheless. He apologizes in advance for any Great Fires this may cause. His website is jacobsagerweinstein.com, and he is @jacobsw on Twitter.
Loading...
or
Not Currently Available for Direct Purchase