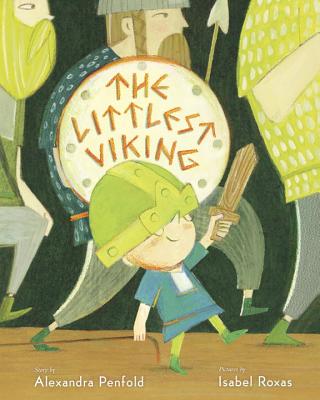 A hilarious story about what happens to the littlest and loudest Viking when an even littler and louder Viking arrives, perfect for fans of The Princess and the Pony and I Don't Want to Be a Frog.

Sven might be the littlest Viking, but he has no trouble making himself known. He has the loudest warrior cry and the fiercest set of teeth. He loves to pillage and plunder. But there's a new kid in town--a warrior princess, who is smaller than Sven and even louder. What's a little Viking to do?

"Penfold folds in fun ancient analogues to tried-and-true methods of appeasing cranky little ones, and Roxas's liberal use of a color perhaps best described as neon snot brings a punk edge to her scenes of Viking family life. Irreverent yet tender."--Publishers Weekly, Starred review

"A warm tale of family togetherness."--Kirkus

"A spirited tale about stopping a tantrum with a story, perfect for storytime or one-on-one sharing."--SLJ

Alexandra Penfold is the author of Eat, Sleep, Poop, We Are Brothers, and New York A la Cart: Recipes and Stories from the Big Apple's Best Food Trucks. She lives with her husband and three children in Brooklyn, where she is a literary agent at Upstart Crow. Learn more about her on Twitter @AgentPenfold.

Isabel Roxas is the littlest of her tribe. She is an artist with a taste for the odd and uncommon and for tales that go awry. She has illustrated several books including Let Me Finish! with author Minh Lê and A Day in the Market with May Tobias-Papa. When Isabel is not crafting pictures and stories, she is making little creatures out of clay. Learn more about Isabel online at studioroxas.com or on Instagram at @studioroxas.

Praise For The Littlest Viking…