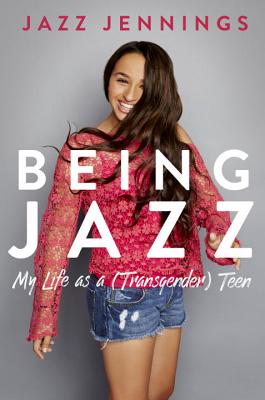 My Life as a (Transgender) Teen

Get ready for season 4 of the popular TLC show I Am Jazz! Teen advocate and trailblazer Jazz Jennings—named one of “The 25 Most Influential Teens” of the year by Time—shares her very public transgender journey, as she inspires people to accept the differences in others while they embrace their own truths.

“[Jazz’s] touching book serves as a rallying cry for understanding and acceptance.”—Bustle

Jazz Jennings is one of the youngest and most prominent voices in the national discussion about gender identity. At the age of five, Jazz transitioned to life as a girl, with the support of her parents. A year later, her parents allowed her to share her incredible journey in her first Barbara Walters interview, aired at a time when the public was much less knowledgeable or accepting of the transgender community. This groundbreaking interview was followed over the years by other high-profile interviews, a documentary, the launch of her YouTube channel, a picture book, and her own reality TV series—I Am Jazz—making her one of the most recognizable activists for transgender teens, children, and adults.

In her remarkable memoir, Jazz reflects on these very public experiences and how they have helped shape the mainstream attitude toward the transgender community. But it hasn’t all been easy. Jazz has faced many challenges, bullying, discrimination, and rejection, yet she perseveres as she educates others about her life as a transgender teen. Through it all, her family has been beside her on this journey, standing together against those who don't understand the true meaning of tolerance and unconditional love. Now Jazz must learn to navigate the physical, social, and emotional upheavals of adolescence—particularly high school—complicated by the unique challenges of being a transgender teen. Making the journey from girl to woman is never easy—especially when you began your life in a boy’s body.

“Jazz is one of the transgender community's most important activists.”  —Cosmopolitan

“Wise beyond her years.” —Teen Vogue

Jazz Jennings is a trans woman, YouTube celebrity, spokesmodel, activist, and author of the picture book I Am Jazz. She has a docu-series about her life also called I Am Jazz on TLC, which started airing in July 2015. She was named to Time’s “Most Influential Teens” list two years in a row, was one of Huffington Post’s “14 Most Fearless Teens,” and was the youngest person ever featured on Out’s “Out 100,” as well as on Advocate’s “40 Under 40” list. In 2014, she was named a Human Rights Campaign Youth Ambassador and received LogoTV’s Youth Trailblazer Award. Jazz also hosts a series of videos about her life on YouTube and is the face of Clean & Clear’s latest ad campaign. You can follow her on Facebook, on Instagram, and on Twitter at @jazzjennings__, or subscribe to her YouTube channel.

Praise For Being Jazz: My Life as a (Transgender) Teen…

“Her story is an important addition to the slender but growing body of transgender literature and belongs in every library.” —Booklist, starred review

"For readers looking for a candid introduction to some of the issues facing trans children and teens, this book is an excellent start." —Publishers Weekly

"The teen's successes and nearly limitless self-confidence and optimism will be reassuring for the family and friends of trans youth." —SLJ


Praise for the picture book I Am Jazz:

“Jazz is a sensitive and courageous young woman. Her story is inspiring and important to read. By sharing her experiences and view she has added to our understanding and compassion for the transgender experience.” —Barbara Walters

“Jazz [is] an eloquent spokesperson for transgender kids.” —Katie Couric

“I wish I had had a book like this when I was a kid struggling with gender identity questions. I found it deeply moving in its simplicity and honesty.” —Laverne Cox, acclaimed actress and transgender advocate

“A terrific and timely book that explains to kids what it means to be transgender and — more importantly — that reminds kids our similarities are much more important than our differences.” —New York Times bestselling author Jodi Picoult

“All young people — regardless of difference — deserve the things Jazz shares in her lovely book: a loving family, supportive friends, and the freedom to be their true selves. A beautifully illustrated and accessible primer on one trans girl's journey of living her truth.” —Janet Mock, New York Times Bestselling author of Redefining Realness

“I Am Jazz is honest, inspiring, and beautiful—but its greatest strength is it never apologizes for being different.” —New York Times bestselling author Brad Meltzer
or
Not Currently Available for Direct Purchase
Copyright © 2020 American Booksellers Association