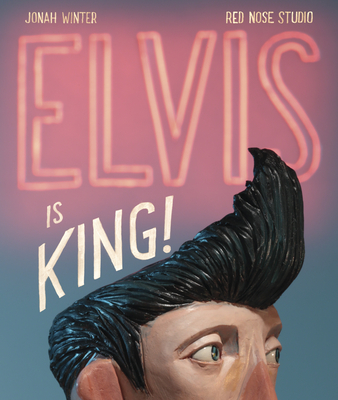 Elvis Presley--the King of Rock 'n' Roll, still beloved by millions of Americans--comes to vibrant, gyrating life in this extraordinary picture-book biography from an award-winning author and the winner of a New York Times Best Illustrated Book Award.

Here's the perfect book for anyone who wants to introduce rock 'n' roll and its king to the child in their lives. In single- page "chapters" with titles like "The First Cheeseburger Ever Eaten by Elvis" and "Shazam! A Blond Boy Turns into a Black-Haired Teenager," readers can follow key moments in Presley's life, from his birth on the wrong side of the railroad tracks in the Deep South, to playing his first guitar in grade school, to being so nervous during a performance as a teenager that he starts shaking . . . and changes the world!

Jonah Winter and Red Nose Studio have created a tour-de-force that captures a boy's loneliness and longing, along with the energy and excitement, passion, and raw talent that was Elvis Presley.

Praise For Elvis Is King!…

"A reprise collaboration between Winter and Red Nose Studio is indeed something to celebrate (see Here Comes the Garbage Barge, BCCB 4/10), and both author and illustration team are at peak performance in this sly, rollicking picture book bio of Elvis Presley and his rise from mic-shy blond tyke to teen dreamboat with product-infused raven hair who turned his stage-fright trembling into iconic sex appeal" -- Bulletin, starred review

Jonah Winter is the award-winning author of more than forty nonfiction picture books that promote environmental awareness and social and racial justice. Among them are Here Comes the Garbage Barge!; Ruth Bader Ginsburg: The Case of R.B.G. vs. Inequality; My Name is James Madison Hemings; Barack; The Founding Fathers!; and Lillian’s Right to Vote, a Jane Addams Children’s Book Award recipient and Kirkus Prize finalist. Visit him at jonahwinter.com.

CHRIS SICKELS, the creative force behind the award-winning Red Nose Studio, has illustrated Here Comes the Garbage Barge! by Jonah Winter (4 starred reviews, New York Times Best Illustrated Book Award) and The Secret Subway by Shana Corey (3 starred reviews, Amazon Best Children's Book of 2016). His 3-D illustrations are built from wire, fabric, wood, found objects, and more. His work has appeared in the New York Times and the Wall Street Journal and as a poster for the NYC subway. He has been awarded three gold medals and one silver by the Society of Illustrators. Visit him at rednosestudio.com or on Twitter @rednosestudio.
Loading...
or
Not Currently Available for Direct Purchase