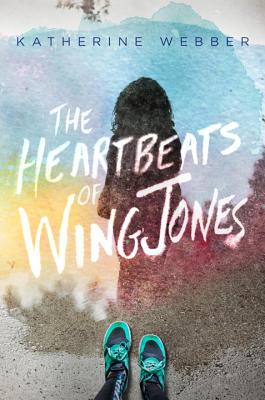 The Heartbeats of Wing Jones (Hardcover)

Wing Jones, like everyone else in her town, has worshipped her older brother, Marcus, for as long as she can remember. Good-looking, popular, and the star of the football team, Marcus is everything his sister is not.

Until the night everything changes when Marcus, drunk at the wheel after a party, kills two people and barely survives himself. With Marcus now in a coma, Wing is crushed, confused, and angry. She is tormented at school for Marcus’s mistake, haunted at home by her mother and grandmothers’ grief. In addition to all this, Wing is scared that the bank is going to repossess her home because her family can’t afford Marcus’s mounting medical bills.

Every night, unable to sleep, Wing finds herself sneaking out to go to the school’s empty track. When Aaron, Marcus’s best friend, sees her running one night, he recognizes that her speed, skill, and agility could get her spot on the track team. And better still, an opportunity at a coveted sponsorship from a major athletic gear company. Wing can’t pass up the opportunity to train with her longtime crush and to help her struggling family, but can she handle being thrust out of Marcus’s shadow and into the spotlight?

"The swiftly paced story will quickly sweep up readers...[a] well-crafted, inspirational debut with plenty of heart, hope, and determination." —Booklist

"A story showing how hope and love can blossom in the midst of chaos." —Publishers Weekly

KATHERINE WEBBER was born in Southern California, and has lived in Hong Kong, Hawaii, and Atlanta. She currently lives in London with her husband.

Katherine studied comparative literature at the University of California, Davis, and Chinese literature and language at the Chinese University of Hong Kong. She has worked at an international translation company, a technology startup, and most recently, a London-based reading charity. She spends far too much time on Twitter, so she invites you to come say hello @kwebberwrites. Travel, books, and eating out are her favorite indulgences. The Heartbeats of Wing Jones is her first novel.

Praise For The Heartbeats of Wing Jones…

"The swiftly paced story will quickly sweep up readers...[a] well-crafted, inspirational debut with plenty of heart, hope, and determination." —Booklist

"This realistic coming-of-age novel, touched with magical realism, is full of diverse and strong female characters....[and] about family, love, and the courage to stand up to life’s challenges." —SLJ

"Wing's sense of isolation is well-captured, and her grief and confusion are raw and moving...a solid debut." —Kirkus Reviews

"A story showing how hope and love can blossom in the midst of chaos." —Publishers Weekly
or support indie stores by buying on
Copyright © 2020 American Booksellers Association