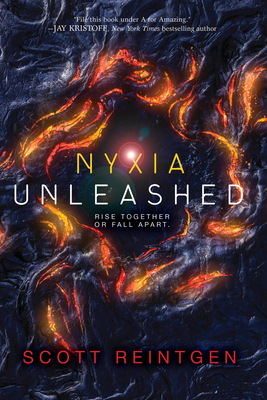 Discover book two in the sci-fi space trilogy that Bustle described as "The 100 meets Illuminae" and Marie Lu called, "a high-octane thriller."

Emmett Atwater thought Babel's game sounded easy. Get points. Get paid. Go home. But it didn't take long for him to learn that Babel's competition was full of broken promises, none darker or more damaging than the last one.

Now Emmett and the rest of the Genesis spaceship survivors must rally and forge their own path through a new world. Their mission from Babel is simple: extract nyxia, the most valuable material in the universe, and play nice with the indigenous Adamite population.

But Emmett and the others quickly realize they are caught between two powerful forces-Babel and the Adamites-with clashing desires. Will the Genesis team make it out alive before it's too late?

Praise for Book 1 in The Nyxia Triad:

"This is an amazing continuation of a solid first installment." —SLJ

"The series offers a great deal to YA science fiction, and readers will be anxiously looking forward to the next installment." —VOYA

Praise for Book 1 in The Nyxia Triad:
“The 100 meets Illuminae in this high-octane sci-fi thriller.” —Bustle

Scott Reintgen is the author of the Nyxia Triad series. His former career as a teacher of English and creative writing in diverse urban communities in North Carolina taught him the difficult lesson that inspiration isn't equally accessible to everyone. So he set out to write a novel for the front-row sleepers and back-row dreamers in his classes. He hopes that his former students see themselves, vibrant and on the page, in characters like Emmett. You can follow him on Facebook, on Instagram, and on Twitter at @Scott_Thought.
Loading...
or
Not Currently Available for Direct Purchase