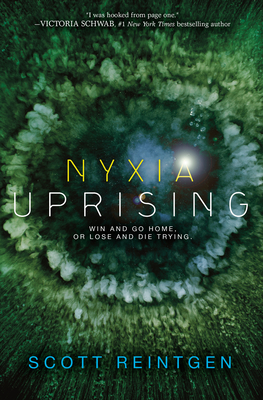 In the Nyxia Triad series finale, Emmett and the Genesis team must join forces with a surprising set of allies if they're ever to make it home alive.

The Genesis team may have been brought to Eden as Babel's unsuspecting pawns, but they refuse to be sacrificed in this winner-take-all game. Thanks to their secret alliance with Eden's indigenous population, they know something Babel doesn't.

This world is coming to an end.

But Emmett and the Genesis team lost their secret advantage when their escape route was destroyed, leaving them stranded on the dying planet with their adversary. They must find a way to win one final battle for control of the Genesis ships--or they'll lose Babel's twisted game once and for all. This is their last chance to rise.

Praise for The Nyxia Triad:
“The 100 meets Illuminae in this high-octane sci-fi thriller.” —Bustle

Scott Reintgen is the author of the Nyxia Triad series. His former career as a teacher of English and creative writing in diverse urban communities in North Carolina taught him the difficult lesson that inspiration isn't equally accessible to everyone. So he set out to write a novel for the front-row sleepers and back-row dreamers in his classes. He hopes that his former students see themselves, vibrant and on the page, in characters like Emmett. You can follow him on Facebook, on Instagram, and on Twitter at @Scott_Thought.
Loading...
or support indie stores by buying on
(This book is on backorder)