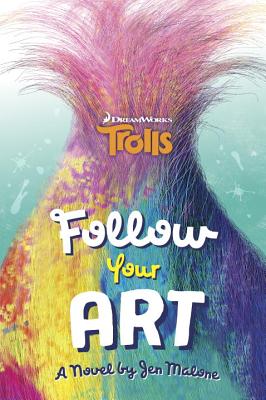 DreamWorks Animation’s TROLLS is an irreverent comedy extravaganza with incredible music! From the genius creators of SHREK, TROLLS stars Poppy, the optimistic leader of the Trolls, and her polar opposite, Branch. Together, this unlikely pair of Trolls must embark on an adventure that takes them far beyond the only world they've ever known.

Now you can meet the main characters and tour Troll Village before you see the movie!

Trolls are the singing-est, dancing-est, hugging-est folks in the forest and Harper and Poppy are two Trolls with an epic mission: find the perfect project to showcase at Harper's pop-up art gallery. It's not going to be easy. The projects are awesome--from the hottest tunes to the latest fashions. That's why Harper asked Poppy to help. Two heads (of fantastic hair!) are better than one. But what happens when Harper gets too focues on perfection? Can Poppy's positivity snap her out of it? DreamWorks Trolls: Follow Your Art is an exciting original story all about the characters from the hit movie.

Jen Malone writes adult travel romances and humorous "girl power” middle-grade adventures. Her latest novel, Follow Your Art, is a collaboration with Dreamworks Animation and Penguin Random House on a companion story to the animated film Trolls. Malone's other published titles include The Sleepover, the You’re Invited series, At Your Service, Map to the Stars, and Wanderlost. You can learn more about Malone and her books at www.jenmalonewrites.com.   Find her on Twitter and Instagram @jenmalonewrites.

Established in July 2013 in a merger between Penguin and Random House, Penguin Random House, with nearly 250 independent imprints and brands on five continents, more than 15,000 new titles published each year, and close to 800 million print, audio, and eBooks sold annually, is the world’s leading trade book publisher. Like its predecessor companies, Penguin Random House is committed to publishing adult and children’s fiction and nonfiction print editions and is a pioneer in digital publishing. Its publishing lists include more than 60 Nobel Prize laureates and hundreds of the world’s most widely read authors.
or
Not Currently Available for Direct Purchase
Copyright © 2020 American Booksellers Association