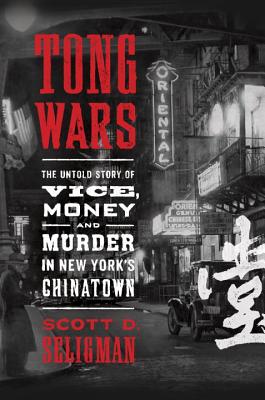 The Untold Story of Vice, Money, and Murder in New York's Chinatown

A mesmerizing true story of money, murder, gambling, prostitution, and opium in a "wild ramble around Chinatown in its darkest days." (The New Yorker)

Nothing had worked. Not threats or negotiations, not shutting down the betting parlors or opium dens, not house-to-house searches or throwing Chinese offenders into prison. Not even executing them. The New York DA was running out of ideas and more people were dying every day as the weapons of choice evolved from hatchets and meat cleavers to pistols, automatic weapons, and even bombs. Welcome to New York City’s Chinatown in 1925.
The Chinese in turn-of-the-last-century New York were mostly immigrant peasants and shopkeepers who worked as laundrymen, cigar makers, and domestics. They gravitated to lower Manhattan and lived as Chinese an existence as possible, their few diversions—gambling, opium, and prostitution—available but, sadly, illegal. It didn’t take long before one resourceful merchant saw a golden opportunity to feather his nest by positioning himself squarely between the vice dens and the police charged with shutting them down.
Tong Wars is historical true crime set against the perfect landscape: Tammany-era New York City. Representatives of rival tongs (secret societies) corner the various markets of sin using admirably creative strategies. The city government was already corrupt from top to bottom, so once one tong began taxing the gambling dens and paying off the authorities, a rival, jealously eyeing its lucrative franchise, co-opted a local reformist group to help eliminate it. Pretty soon Chinese were slaughtering one another in the streets, inaugurating a succession of wars that raged for the next thirty years.
Scott D. Seligman’s account roars through three decades of turmoil, with characters ranging from gangsters and drug lords to reformers and do-gooders to judges, prosecutors, cops, and pols of every stripe and color. A true story set in Prohibition-era Manhattan a generation after Gangs of New York, but fought on the very same turf.

Scott D. Seligman is a historian, retired corporate executive, and career China hand, and he holds degrees from Princeton and Harvard. Fluent in Mandarin and conversant in Cantonese, he lived in Taiwan, Hong Kong, and China and has worked as a legislative assistant in Congress, a businessman in China, and a communications director of a Fortune 50 company. He is the author of many scholarly and business books, including Chinese Business Etiquette and The First Chinese American. He has published articles in the Asian Wall Street Journal, The Washington Post, the Seattle Times, the China Business Review, the Jewish Daily Forward, China Heritage Quarterly, and the New York History and Smithsonian Asian Pacific American Center blogs.

Praise For Tong Wars: The Untold Story of Vice, Money, and Murder in New York's Chinatown…

A "wild ramble around Chinatown in its darkest days." --The New Yorker

“A mesmerizing and brutal look at the hidden world of Chinese tongs.” –Vice

“Ably demystifies the stereotypes in an age rife with discrimination and unchecked police abuse.” –Kirkus Reviews

"The best kind of true crime book: a solid social history as well as a gripping narrative of murder and revenge." –Publishers Weekly

“With Tong Wars, Seligman pulls back the veil on thirty years of hidden history, revealing an amazing cast of gangsters, crooked businessmen and corrupt lawmen that gave rise to one of the most extraordinary eras in the underworld history of the United States. This is not only a Chinese story; it is an American story. The research is impeccable and the storytelling light on its feet. Seligman pierces the nexus of political, cultural and economic forces that are at the heart of organized crime, making this essential reading for crime buffs, historians and lovers of larger-than-life sagas about the American experience. You may think you know the full story of organized crime in America, but until you read this book – you don’t.”
--T.J. English, New York Times best-selling author of  Where the Bodies Were Buried and Havana Nocturne

“New York’s early Chinatown has been portrayed unfairly as an exaggerated Yellow Peril den of mysterious Orientals. By diligently and expertly trawling the evidence, however, Scott Seligman has unshrouded the mystery and offered up the gripping story of the men of Chinatown’s underworld and their intramural battles over gambling, opium and other vices. In Tong Wars, he has rescued a tough and hardscrabble immigrant community from obscurity and offered a compelling new chapter in New York’s great story.”
--Paul French,  author of the New York Times bestselling Midnight in Peking

“Tong Wars pulls no punches. Seligman brings the skills of a scholar and a detective to a   story that plays out like a good police procedural novel. This is lively material, and Seligman deftly avoids the trap of simply cataloging the crimes of nameless, faceless denizens herded into an Asian American ghetto. His linguistic fluency and obvious comfort with primary Chinese language sources allow him to assess the myths and the brutal realities of the tong wars, and he has brought a daring and fresh approach to an important American story.”
—Sue Lee, executive director, Chinese Historical Society of America

“Seligman masterfully examines the undercurrents of 1925 New York Chinatown in an engrossing depiction of a complex time. By shining a light on the power of association, the struggle for power, and the desire to survive, Seligman gives 'face' to the challenges of community-infighting, community-building, and community-identity in a racist and exclusionary America.”
--Nancy Yao Maasbach , President, Museum of Chinese in America