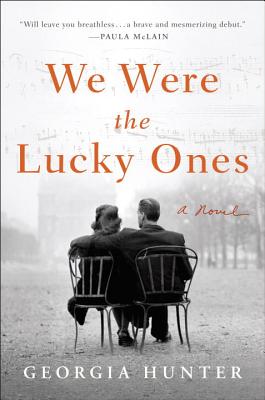 We Were the Lucky Ones

Inspired by the incredible true story of one Jewish family separated at the start of World War II, determined to survive—and to reunite—We Were the Lucky Ones is a tribute to the triumph of hope and love against all odds

“Love in the face of global adversity? It couldn't be more timely.” —Glamour

It is the spring of 1939 and three generations of the Kurc family are doing their best to live normal lives, even as the shadow of war grows closer. The talk around the family Seder table is of new babies and budding romance, not of the increasing hardships threatening Jews in their hometown of Radom, Poland. But soon the horrors overtaking Europe will become inescapable and the Kurcs will be flung to the far corners of the world, each desperately trying to navigate his or her own path to safety.

As one sibling is forced into exile, another attempts to flee the continent, while others struggle to escape certain death, either by working grueling hours on empty stomachs in the factories of the ghetto or by hiding as gentiles in plain sight. Driven by an unwavering will to survive and by the fear that they may never see one another again, the Kurcs must rely on hope, ingenuity, and inner strength to persevere.

An extraordinary, propulsive novel, We Were the Lucky Ones demonstrates how in the face of the twentieth century’s darkest moment, the human spirit can endure and even thrive.

Praise For We Were the Lucky Ones…

“[Georgia Hunter is] just as courageous as the characters her writing will never let us forget.” —Harper’s Bazaar

“Love in the face of global adversity? It couldn't be more timely.” —Glamour, “Best Books to Read in 2017”

“A remarkable story of courage, love, and of course, luck.” —Book Riot’s Best Books of 2017

“[A] gripping and moving story.” —Bustle, “15 New Authors You’re Going To Be Obsessed With This Year”

“Turning history into fiction can be tricky . . . Hunter finesses the challenge. Her novel brings the Kurcs to life in heart-pounding detail.” —The Jewish Voice

“The story that so grippingly comes across in the pages of We Were the Lucky Ones isn't strictly fiction—the characters and events that inhabit this Holocaust survival story are based on her family's own history.” —Newsweek

“[A] remarkable history . . . Hunter sidesteps hollow sentimentality and nihilism, revealing instead the beautiful complexity and ambiguity of life in this extraordinarily moving tale.” —Publishers Weekly

“Reading Georgia Hunter’s We Were the Lucky Ones is like being swung heart first into history. Her engrossing and deeply affecting account . . . will leave you breathless. But the true wonder of the book is how convincingly Hunter inhabits these characters, each modeled after her own family members. This is their story Hunter is telling so beautifully and profoundly, and ours as well. A brave and mesmerizing debut, and a truly tremendous accomplishment.” —Paula McLain, author of The Paris Wife and Circling the Sun

“We Were the Lucky Ones is the most gripping novel I've read in years. Georgia Hunter pulled me into another world, vivid, horrifying, astonishing, and heartbreaking.” —Lauren Belfer, New York Times bestselling author of And After the Fire, A Fierce Radiance, and City of Light.

“We Were the Lucky Ones is a skillfully woven reimagining of [Hunter’s] own family’s struggle for survival during World War II . . . with spectacular historical detail. This emotionally resonant, gripping portrait of the war is filled with beautifully drawn and wonderfully heroic characters I won’t soon forget.” —Jillian Cantor, author of Margot and The Hours Count

“Georgia Hunter has crafted her own family history into a sprawling, yet still intimate portrait of those swept up in the devastation of war and scattered to the winds.  It is an astonishing saga of hope, of luck, of destruction, and most remarkably of love, made all the more astonishing because of the true story at its core.” —David R. Gillham, New York Times bestselling author of City of Women

“Elegantly executed and always clear, Hunter evokes pre-war Poland with loving detail, clearly showing what was left behind and lost. . . . We Were the Lucky Ones is a compelling read, notable for Hunter’s clear portraits of her plucky, resilient family, and for her ability to build suspense and investment without emotional manipulation.” —Courtney Naliboff, ReformJudaism

When Georgia Hunter was fifteen years old, she learned that she came from a family of Holocaust survivors. We Were the Lucky Ones was born of her quest to uncover her family’s staggering history. Hunter’s website, georgiahunterauthor.com, offers a behind-the-scenes glimpse at the extensive research this project has entailed. She lives in Connecticut.

1. The Kurc family was assimilated into Polish life before the war. What are some examples of that assimilation, and how do you think that helped or hindered the family’s chances of survival?

2. Who was your favorite character, and why?

3. Which scene did you find most harrowing? Most comforting?

4. Addy meets Eliska en route to Brazil. Did you find it strange that he would fall in love despite the circumstances? In what ways do you think Eliska and Addy’s feelings for one another would have been similar or different had they met under more normal circumstances?

5. Jakob has been the love of Bella’s life since she was a teenager, and yet not even he can comfort her when Bella learns of her sister and parents’ deaths. In the end, though, Bella turns the corner and is able to let Jakob back into her life, and being with him helps her to heal. Have you ever had a relationship with a friend or partner that was either damaged or strengthened by sharing a tough experience?

6. Halina is the most rebellious of the five Kurc siblings and follows only one set of rules—her own. In what ways do you think Halina’s personality affects the family’s fate throughout the war?

7. When Poland falls in September 1939, Germany takes over the west and Russia the east.

Genek, who finds himself on the eastern side, refuses to accept Soviet citizenship, thereby labeling himself a resistor. Why do you think Genek felt so strongly about holding onto the nationality of his home country, despite the fact that, technically, it no longer existed? Would you have done the same? What does your national identity mean to you?

8. Although the author does not deliberately draw parallels to other major events in history or to today’s current events, some readers have commented on what they see as shared circumstances. What similarities, if any, did you notice?

9. What are some messages in the book that you feel would be valuable to pass along to future generations?

10. There are several examples in the book of strangers who put their lives at risk to help the Kurcs, such as the Górskis, who take Sol and Nechuma into hiding; the Mother Superior, who allows Felicia into her convent; and Herr Den, who vouches for Halina’s Aryan identity. What would you have done had you been in these characters’ shoes? What motivates people to put themselves on the line—despite the deadly risks of getting caught—to help people in need?

ABOUT THE WRITING AND THE READING EXPERIENCE:

1. The author did not know about her family’s Holocaust past, or even realize she was one-quarter Jewish, until she was fifteen years old. Why do you think this was the case? How do you think this delayed awareness of her past impacted her approach to writing We Were the Lucky Ones?

2. The book is written from multiple perspectives. What was your experience in trying to follow the different narratives of the scattered family members? Did you use any particular strategies to keep track?

3. Why do you think the author, having amassed a thorough factual history of the family’s saga, chose to write We Were the Lucky Ones as historical fiction rather than nonfiction?

4. The author chose to provide historical context through factual snippets inserted between some of the chapters, rather than through the eyes of the characters. How did these historical interludes affect your experience as a reader?

5. Most historical fiction is written in the past tense. Why do you think the author chose to write this story in the present tense? What impact, if any, did this have on your reading experience?