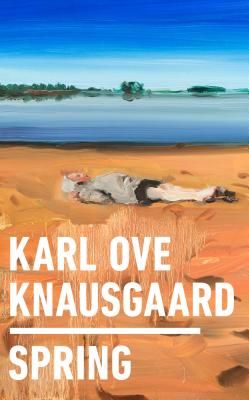 “Spring features Knausgaard unbound, writing for the first time without a gimmick or the crutch of extravagant experimentation…Fall in love with the world, he enjoins, stay sensitive to it, stay in it.”
-The New York Times

"Poignant and beautiful…Even if you think you won’t like Knausgaard, try this one and you’ll get him and get why some of us have gone crazy for him."
—Los Angeles Review of Books

So begins Spring, the recommencement of Knausgaard’s fantastic and spellbinding literary project of assembling a personal encyclopedia of the world addressed directly to his newly born daughter. But here Knausgaard must also tell his daughter the story of what happened during the time when her mother was pregnant, and explain why he now has to attend appointments with child services. In order to keep his daughter safe, he must tell a terrible story, one which unfolds with acute psychological suspense over the course of a single day.

Utterly gripping and brilliantly rendered in Knausgaard’s famously sensitive, pensive, and honest style, Spring is the account of a shocking and heartbreaking familial trauma and the emotional epicenter of this singular literary series.

"If you still haven’t tried Knausgaard or have been unsatisfied with his helplessly casual New York Times travel essays, try Spring. It’s poignant and beautiful…Even if you think you won’t like Knausgaard, try this one and you’ll get him and get why some of us have gone crazy for him." — Los Angeles Review of Books

“Spring features Knausgaard unbound, writing for the first time without a gimmick or the crutch of extravagant experimentation. . .  Spring refuses contrivance; it refuses to parry. Instead, over the course of one day, we watch Knausgaard care for the children and home, his wife mysteriously absent. He changes diapers, makes meatballs, desultorily enforces some discipline and does a harrowing amount of laundry. He sneaks off for a cigarette and writing time. And the book’s blunt, unforced telling brings the larger project’s meaning into sudden, brilliant focus…This series is the rejoinder to his father’s diary. Knausgaard has assembled this living encyclopedia for his daughter with a wild and desperate sort of love, as a way to forge her attachment to the world, to fasten her to it — to fight the family legacy of becoming unmoored and alienated. Fall in love with the world, he enjoins, stay sensitive to it, stay in it.” — The New York Times

"Knausgaard’s assets are on full display, including his precise writing style and his unerring sense of detail. He is constantly attuned to his surroundings, noting the changing weather and the colors of flowers, which may account for why he is so successful at what he does: transforming quotidian life into drama. . . For anyone who is curious about this writer but has not felt the urge to invest in the full 3,500 pages of his autobiographical series, “My Struggle,” “Spring” makes for an excellent introduction. It is the shortest book he has ever written, but it is all muscle, a generous slice of a thoughtful, ruminative life.” — The Washington Post

“This volume is a novella that more directly recalls his epic My Struggle series, driven by the same intensely analytical impulses… If we neglect simple things, how else are we neglectful? And how much harm are we unwittingly bringing upon others, especially those we love most? A fine stand-alone meditation on mortality and fatherhood.” — Kirkus, starred review

“Knausgaard’s latest is a radical, thrilling departure from the first two volumes of his Seasons Quartet. While Autumn and Winter took the form of short essays, this moving novel stylistically resembles his acclaimed My Struggle series… This is a remarkably honest take on the strange linkages between love, loss, laughter, and self-destruction, a perfect distillation of Knausgaard’s unique gifts.” — Publishers Weekly, starred review

Karl Ove Knausgaard’s first novel, Out of the World, was the first ever debut novel to win the Norwegian Critics’ Prize and his second, A Time for Everything, was widely acclaimed. The My Struggle cycle of novels has been heralded as a masterpiece wherever it has appeared, and the first volume was awarded the prestigious Brage Prize.
Loading...
or
Not Currently Available for Direct Purchase