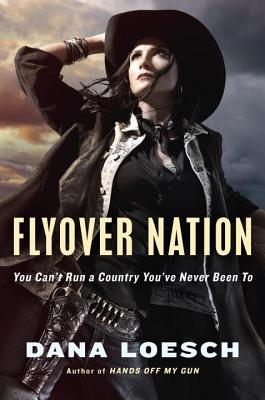 You Can't Run a Country You've Never Been To

Dana Loesch believes in Christianity, patriotism, traditional marriage, and the right to bear arms, among other “quaint”  ideas. For the elites in DC, Los Angeles, New York, and Silicon Valley, that makes her as bizarre as a three-headed dog.

Loesch is alarmed that America is fracturing into two countries—not North and South, but Coastal and Flyover. Worse, the people in charge don’t understand the first thing about how most of the country thinks and lives. Consider a few examples . . .

•  Flyovers think the Declaration of Independence was crystal clear: “All men are created equal.” For Coastals, Black Lives Matter—but anyone who adds that all lives matter must be a racist.

•  Coastals think they understand firearms because they watched a TV movie about Columbine. Fly- overs get a deer rifle for their thirteenth birthday.

•  Coastals talk about blue-collar workers in the abstract. Flyovers have a relative who works the night shift in a granola bar factory, where the big perk is taking home a bag full of granola bars every Friday.

•  Coastals think every problem—from hurt feelings to the cost of birth control—requires government intervention and huge federal spending. Flyovers know that money isn’t magic fairy dust, and many problems can be solved only by individual character and hard work.

It would all be funny—if Coastals weren’t winning on most of today’s big issues.

As Loesch writes, “Most of these pinkies-out, cocktail- drinking-appletini fans selfishly entertain grandiose plans of economic equality without realizing the negative impact their plans would have on the very people they pride themselves on helping. That’s the true class warfare.”

Loesch shines the light of truth on everything from feminism to gun violence to abortion. She reveals the damage done by elitists who flat-out don’t get the lives and values of people in the heart of the country. And she asks commonsense questions such as: How can you be angry at Walmart if you’ve never shopped in one? How can you hate the police if you’ve never needed help from a cop? How can you attack Christians if you don’t have a single friend who goes to church?

In other words, how can you run a country you’ve never been to? And how much could our politics improve if Coastals would actually listen to their fellow Americans? This book is a rallying cry for anyone who wants our leaders to understand and respect the culture that made America exceptional in the first place.

DANA LOESCH hosts The Dana Show: The Conservative Alternative, an award-winning, nationally syndicated daily radio show heard on stations across the country, as well as Dana on The Blaze television network. Her first book, Hands Off My Gun: Defeating the Plot to Disarm America, was a national bestseller and won raves from fans such as Michelle Malkin, Mark Levin, and Sean Hannity. Loesch is a former newspaper columnist and was an editor under Andrew Breitbart at BigJournalism.com. She cofounded the Tea Party movement in her home- town of St. Louis and speaks regularly to audiences around the country. She lives in Texas with her husband and two children.


Praise For Flyover Nation: You Can't Run a Country You've Never Been To…

“The expanse between the East Coast and West Coast is often ignored, underestimated, and abused, despite churning out our country’s soldiers, engineers, and farmers, and holding the line on American values. Dana Loesch provides us with the quintessential snapshot of real America and shows us why it’s necessary to protect it.”
—GLENN BECK, author of It IS About Islam

“Dana Loesch captures the arrogance of beltway elites toward Flyover Nation. Living in their own bubble, they haven’t the slightest clue how we think, what we value, and how we live. But they’ll find out when they read this excellent book.”
—DAVID LIMBAUGH, author of The Emmaus Code

“Dana Loesch is an amazingly gifted writer. Every page of Flyover Nation crackles with life. Brilliant! And an absolute joy to read. From cover to cover, you will love this book.”
—BRAD THOR, author of Foreign Agent
or
Not Currently Available for Direct Purchase
Copyright © 2020 American Booksellers Association