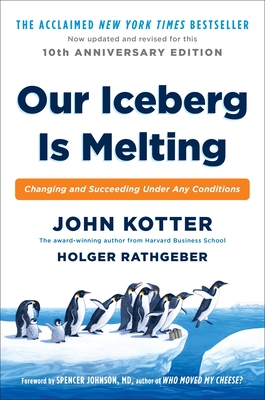 Our Iceberg Is Melting

Changing and Succeeding Under Any Conditions

The revised and updated tenth anniversary edition of the classic, beloved business fable that has changed millions of lives in organizations around the world.

Our Iceberg Is Melting is a simple story about doing well under the stress and uncertainty of rapid change. Based on the award-winning work of Harvard Business School’s John Kotter, it can help you and your colleagues thrive during tough times.

On an iceberg near the coast of Antarctica, group of beautiful emperor pen­guins live as they have for many years. Then one curious bird discovers a potentially devastating problem threatening their home—and almost no one listens to him.

The characters in the story—Fred, Alice, Louis, Buddy, the Professor, and NoNo—are like people you probably recognize in your own organization, including yourself. Their tale is one of resistance to change and heroic action, seemingly intractable obstacles and clever tactics for dealing with those obstacles. The penguins offer an inspiring model as we all struggle to adapt to new circumstances.

Our Iceberg Is Melting is based on John Kotter's pioneer­ing research into the eight steps that can produce needed change in any sort of group. After finishing the story, you'll have a powerful framework for influencing your own team, no matter how big or small.

This tenth anniversary edition preserves the text of the timeless story, together with new illustrations, a revised afterword, and a Q&A with the authors about the responses they've gotten over the past decade. Prepare to be both enlightened and delighted, whether you're already a fan of this classic fable or are discovering it for the first time.


Praise For Our Iceberg Is Melting: Changing and Succeeding Under Any Conditions…

“Whether you work in a business or the business of life, everyone from CEOs to high school students can gain from what they take from this story.”
––from the foreword by Spencer Johnson, M.D., author of Who Moved My Cheese?

“. . . companies should buy a copy for everyone from the CEO to the stock clerk.”
––Michelle Archer, USA Today

“I ordered and distributed sixty copies, evaluated its effect on our change effort, and then ordered five hundred more. . . . This is a gem.”
––Heidi King, Department of Defense

“The penguins in this book will not only steal your heart, they’ll make you a smarter person.”
––Mary Tyler Moore, actress, producer, director, and Academy Award nominee

John Kotter, professor emeritus at Harvard Business School, is often called the world’s foremost authority on leadership and change. His many books, including Leading Change and That's Not How We Do It Here!, have been translated into more than 200 foreign language editions and have been bestsellers around the world. He is a founder of Kotter International, a consulting firm that specializes in helping leaders transform their organizations.

Holger Rathgeber is the coauthor of That's Not How We Do It Here!, a former executive at a medical products firm, and a principal at Kotter International.