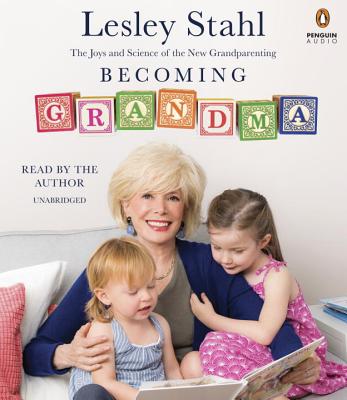 The Joys and Science of the New Grandparenting

The New York Times Bestseller From one of the country's most recognizable journalists: How becoming a grandmother transforms a woman's life. After four decades as a reporter, Lesley Stahl's most vivid and transformative experience of her life was not covering the White House, interviewing heads of state, or researching stories at 60 Minutes. It was becoming a grandmother. She was hit with a jolt of joy so intense and unexpected, she wanted to "investigate" it--as though it were a news flash. And so, using her 60 Minutes skills, she explored how grandmothering changes a woman's life, interviewing friends like Whoopi Goldberg, colleagues like Diane Sawyer (and grandfathers, including Tom Brokaw), as well as the proverbial woman next door. Along with these personal accounts, Stahl speaks with scientists and doctors about physiological changes that occur in women when they have grandchildren; anthropologists about why there are grandmothers, in evolutionary terms; and psychiatrists about the therapeutic effects of grandchildren on both grandmothers and grandfathers. Throughout Becoming Grandma, Stahl shares stories about her own life with granddaughters Jordan and Chloe, about how her relationship with her daughter, Taylor, has changed, and about how being a grandfather has affected her husband, Aaron. In an era when baby boomers are becoming grandparents in droves and when young parents need all the help they can get raising their children, Stahl's book is a timely and affecting read that redefines a cherished relationship. From the Hardcover edition.

LESLEY STAHL is one of America's most recognized and experienced broadcast journalists. Her career has been marked by political scoops, surprising features and award-winning foreign reporting. She has been a 60 Minutes correspondent since 1991; the 2015-2016 season marks her twenty-fifth on the broadcast. Before joining 60 Minutes, Stahl served as CBS News White House correspondent during the Carter, Reagan, and part of the George H.W. Bush presidencies. She also hosted Face the Nation from 1983 to 1991 and coanchored America Tonight from 1989 to 1990. She is married to author and screenwriter Aaron Latham. They have one daughter and two granddaughters. From the Hardcover edition.
or
Not Currently Available for Direct Purchase
Copyright © 2020 American Booksellers Association