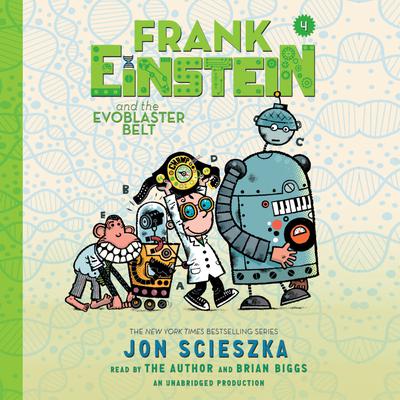 More clever science experiments, funny jokes, and robot hijinks await listeners in book four of the New York Times bestselling Frank Einstein chapter book series from the mad scientist team of Jon Scieszka and Brian Biggs. The perfect combination to engage and entertain listeners, the series features real science facts with adventure and humor, making these books ideal for STEM education. This latest installment examines the quest to unlock the power behind the science of “All Connected Life.”

Integrating real science facts with wacky humor, a silly cast of characters, and science fiction, this uniquely engaging series is an irresistible chemical reaction for middle-grade listeners. The Frank Einstein series encourages middle-graders to question the way things work and to discover how they, too, can experiment with science. In a starred review, Kirkus Reviews raves, “This buoyant, tongue-in-cheek celebration of the impulse to ‘keep asking questions and finding your own answers’ fires on all cylinders,” while Publishers Weekly says that the series “proves that science can be as fun as it is important and useful.”

Jon Scieszka’s books have sold more than 11 million copies. He is the author of The Stinky Cheese Man and Other Fairly Stupid Tales,The True Story of the 3 Little Pigs, the Time Warp Trio series, the Spaceheadz series, and most recently, Battle Bunny, coauthored by Mac Barnett. In 2008, Scieszka was named the inaugural National Ambassador for Young People’s Literature by the Library of Congress. He is also the founder of Guys Read, a web-based literacy program for boys. Scieszka lives in Brooklyn, New York.