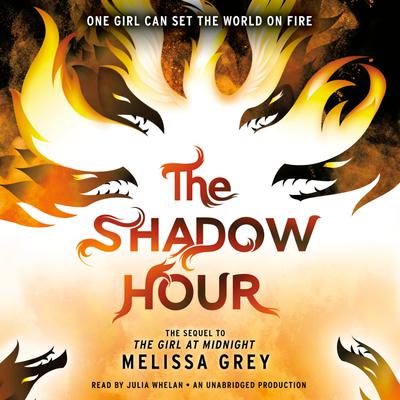 The Shadow Hour (THE GIRL AT MIDNIGHT) (Digital Audiobook)

The much-anticipated sequel to the book Danielle Page, author of Dorothy Must Die, says is "inventive, gorgeous, and epic--Grey dazzles."

Everything in Echo's life changed in a blinding flash when she learned the startling truth: she is the firebird, the creature of light that is said to bring peace.
The firebird has come into the world, but it has not come alone. Every action has an equal and opposite reaction, and Echo can feel a great and terrible darkness rising in the distance. Cosmic forces threaten to tear the world apart.
Echo has already lost her home, her family, and her boyfriend. Now, as the firebird, her path is filled with even greater dangers than the ones she's already overcome.
She knows the Dragon Prince will not fall without a fight.
Echo must decide: can she wield the power of her true nature--or will it prove too strong for her, and burn what's left of her world to the ground?
Welcome to the shadow hour.

Praise for the Girl at Midnight Series:

“A stunning debut. . . . Equal parts atmosphere and adventure, Melissa Grey’s The Girl at Midnight is positively divine.” —Victoria Schwab, author of A Darker Shade of Magic

“You are going to love Echo.” —Bustle.com

“A feisty heroine, fun supporting characters, a mission to save the world, and some seriously spicy romance.” —SLJ

“A page-turner—I was hooked from start to finish.” —Latina Magazine

Melissa Grey was born and raised in New York City. She wrote her first short story at the age of twelve and hasn't stopped writing since. After earning a degree in fine arts at Yale University, she embarked on an adventure of global proportions and discovered a secret talent for navigating subway systems in just about any language. She works as a freelance journalist in New York City. The Shadow Hour is her second novel, and the sequel to her first, The Girl at Midnight. To learn more about Melissa, visit melissa-grey.com, follow @meligrey on Twitter, and look for melissagrey_ on Instagram.