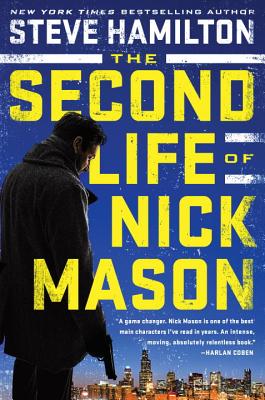 Steve Hamilton is the New York Times-bestselling author of twelve novels, most recently Die a Stranger and Let It Burn.  His debut, A Cold Day in Paradise, won both an Edgar and a Shamus Award for Best First Novel. His standalone novel The Lock Artist was a New York Times Notable Crime Book and won an Alex Award and the Edgar Award for Best Novel. He attended the University of Michigan, where he won the prestigious Hopwood Award for writing, and now lives in Cottekill, NY, with his wife and their two children.

“[The Second Life of Nick Mason] is so good, it legitimately stands shoulder to padded paranoid shoulder with the classics of the crime noir genre… There are so many terrific elements in this novel—Nick’s haunted character, a plot that never darts in the direction you expect it to, and a truly ingenious climax—that I could be here till Labor Day singing its praises.”—Maureen Corrigan, NPR Fresh Air

“[A] reinvention of the noir thriller...Hamilton gives us a bad guy who is willing—and able—to do worse....Edgy and intelligent entertainment that hits with the force of a narrative bullet.”—Arizona Republic

“A captivating thriller...Hamilton's latest novel is ambitious in its criminal scope and it rises to the challenge of not only creating compelling three-dimensional characters, but also fearlessly confronting our classic perceptions of right and wrong, good and evil, as Mason desperately tries to escape his unholy bonds of criminal servitude, regain his autonomy and perhaps whatever's left of his humanity...Time will tell where Mason will ultimately end up, but the next installment in this enthralling series is sure to be another Hamilton page-turner, and can't come soon enough.”—Esquire

“A suspenseful, fast-paced crime novel with the same heart, well-drawn characters and muscular prose that fans of [Hamilton’s] popular Alex McKnight series and his fine stand-alone novels such as The Lock Artist have come to expect.”—Bruce DeSilva, Associated Press

“A fine premise, a vibrant setting, a charismatic antihero...it's a tight, gripping book about a man hellbent on reinventing himself against long odds.”—The New York Times

“The sinner who gets a chance to start over is an archetypal figure in crime fiction. Steve Hamilton works a smart variation on it in The Second Life of Nick Mason.”—Marilyn Stasio, The New York Times Book Review

“Hamilton gets just about everything right in [The Second Life of Nick Mason]. The narrative is spare, descriptions lean and settings authentic.”—The Arizona Republic

“A tense, coiled thriller...It moves like a bullet train, told in a deceptively simple, gin-clear prose that all but sucker punches the reader....One of [Hamilton’s] best.”—Booklist (starred review)

“Hamilton surpasses himself with Mason, who inspires storytelling of the leanest, most gripping sort...A terrific new hero.”—Kirkus Reviews (starred review)

“[A] high-octane series launch...Hamilton guns it like Nick’s 1968 Mustang for a fast and furious ride.”—Publishers Weekly (starred review)

“Steve Hamilton amazes me. Every time I think he's going to zig he zags. As original as any writer I've ever read, Hamilton once again reinvents himself and the genre with another wonderful character and story. Get in on the ground floor with The Second Life of Nick Mason. It's a great read.”—Michael Connelly

“A gamechanger. Nick Mason is one of the best main characters I've read in years. An intense, moving, absolutely relentless book—it will grab you from the first line and never let go.”—Harlan Coben

“Stunning. A gripping non-stop thriller. An engrossing read from page one. Steve Hamilton has delivered a fascinating new character. A flat out terrific read. I could not put this book down.”—Don Winslow

“If this book were a bullet, it would blow a hole right through you. Once Steve Hamilton pulls the trigger, the action in The Second Life of Nick Mason never lets up. Hamilton's tale of a man released from one prison only to find himself trapped in another is told with all the style and power we expect from an Edgar Award-winning author. This is crime fiction at its finest.”—William Kent Krueger (2014 Edgar Winner for Best Novel of 2013)
or
Not Currently Available for Direct Purchase
Copyright © 2020 American Booksellers Association