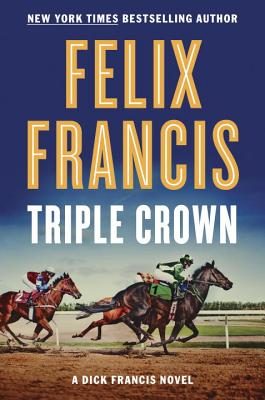 Jefferson Hinkley is back in the newest thriller in the Dick Francis tradition, this time on a special mission to the United States to investigate a conspiracy involving the biggest horse races in the country.

Jeff Hinkley, investigator for the British Horseracing Authority, has been seconded to the US Federal Anti-Corruption in Sports Agency (FACSA) where he has been asked to find a mole in their organization—an informant who is passing on confidential information to those under suspicion in American racing.  At the Kentucky Derby, Jeff joins the FACSA team in a raid on a horse trainer’s barn at Churchill Downs, but the bust is a disaster, and someone ends up dead.  Then, on the morning of the Derby itself, three of the most favored horses in the field fall sick.

These suspicious events can be no coincidence. In search of answers, Jeff goes undercover as a groom on the backstretch at Belmont Park racetrack in New York. But he discovers far more than he was bargaining for: corrupt individuals who will stop at nothing—including murder—to capture the most elusive prize in world sport, the Triple Crown.

“Felix has proven a champion storyteller. . . . Triple Crown is an engaging thriller that bursts out of the gate and maintains a good place throughout. Francis pulls back the curtain on American horse racing, giving readers what goes into getting a thoroughbred ready for the starting gate, as well as the stark differences between racing, and law enforcement, on either side of the Atlantic.”—Mystery Scene

“Felix Francis continues the run of his “Dick Francis novels” (after his father) with this sixth solo racetrack mystery, and it’s another well-crafted nail-biter… Felix Francis has his father’s gift for deft plotting and for creating memorable characters, but his prose is much more expansive… As in all novels in the Francis line, readers will learn a great deal about horses, racetracks, and, here, the tough life of grooms. The action builds to a hold-your-breath climax and brilliant resolution. Another winner in the Francis stable.”—Booklist

Felix Francis, a graduate of London University, is an accomplished outdoorsman, marksman, and pilot who has assisted with the research of many of his father's novels. The co-author of DEAD HEAT, SILKS, EVEN MONEY, and CROSSFIRE, and the author of GAMBLE, BLOODLINE, REFUSAL, DAMAGE, and FRONT RUNNER, he lives in England.

Dick Francis was the author of more than 40 mysteries set against a horse-racing background. Among his numerous awards are three Edgar Awards, the Crime Writers' Association Cartier Diamond Dagger, and the Mystery Writers of America's Grand Master Award. He died in February 2010 at the age of 89.
Loading...
or
Not Currently Available for Direct Purchase