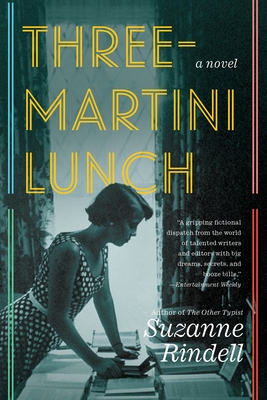 From the author of the “thrilling” (The Christian Science Monitor) novel The Other Typist comes an evocative, multilayered story of ambition, success, and secrecy in 1950s New York.

In 1958, Greenwich Village buzzes with beatniks, jazz clubs, and new ideas—the ideal spot for three ambitious young people to meet. Cliff Nelson, the son of a successful book editor, is convinced he’s the next Kerouac, if only his father would notice. Eden Katz dreams of being an editor but is shocked when she encounters roadblocks to that ambition. And Miles Tillman, a talented black writer from Harlem, seeks to learn the truth about his father’s past, finding love in the process. Though different from one another, all three share a common goal: to succeed in the competitive and uncompromising world of book publishing. As they reach for what they want, they come to understand what they must sacrifice, conceal, and betray to achieve their goals, learning they must live with the consequences of their choices. In Three-Martini Lunch, Suzanne Rindell has written both a page-turning morality tale and a captivating look at a stylish, demanding era—and a world steeped in tradition that’s poised for great upheaval.

“Think of it as the publishing industry’s take on Mad Men: a gripping fictional dispatch from the world of talented writers and editors with big dreams, secrets, and booze bills.”—Entertainment Weekly

“Packed with narrative surprises... Rindell keeps the suspense strong as we wonder if Eden and Cliff and Miles are fated for success or doomed to failure.”—CT Post

“A rollicking period piece that builds to a magnificent crescendo. With an excellent ear for the patter and cadence of the time, Rindell expertly brings a bygone era to life, though the struggles of her trio feel anything but dated. While blackmail and backstabbing keep things suitably scandalous, Rindell also explores deeper issues of race, sexuality, class and gender in ways that feel vital and timely. The end result is a moving novel that proves provocative in more ways than one.”—BookPage

“Sprawling across more than 500 pages, the new novel Three-Martini Lunch captures the excesses as well as the inhibitions of New York City in 1958, from the eponymous meals of the big Manhattan publishing houses, to wild drinking-and-drug bouts in Greenwich Village, to the lingering paranoia of McCarthyism, to the casual racism, sexism, homophobia and anti-Semitism among the professional class.”—New York Journal of Books

“Compulsively readable melodrama about life in the Manhattan publishing world of the 1950s… [Rindell] does it with such high style and draped in such alluring, gin-soaked detail that we overcome our critical selves and root like hell for Eden to become an editor, for Miles to accept his love for Joey, and for Cliff to quit being a jerk.”—Booklist

“[Three-Martini Lunch] offers a captivating look into the vibrancy of mid-20th-century New York City through the eyes of three flawed and therefore, fascinating young characters.”—Library Journal

“With its vivid historical setting and the narrators' distinct voices, this ambitious novel is both an homage to the beatnik generation and its literature, as well as an evocative story of the price one pays for going after one's dreams.”—Publishers Weekly

“Suzanne Rindell’s latest novel is a riveting account of three young adults struggling to define themselves against issues of family, race, and sexual identity in the intolerant world of the '50s. Three-Martini Lunch is a gripping study of the ways in which people betray others and themselves in an effort to carve out places for themselves in a competitive and unforgiving world.”—Sara Gruen, New York Times-bestselling author of Water for Elephants and At the Water’s Edge

“Set in New York City's Beat Generation, a skillfully crafted story of three young professionals trying to make it big in publishing: This is Three-Martini Lunch.  Their choices and sacrifices ripple out from the pages and shake our hearts. A gripping read.”—Sarah McCoy, New York Times-bestselling author of The Mapmaker's Children

“Three-Martini Lunch  does for publishing what Mad Men did for advertising. It takes you back in time and then proceeds to etch in a whole world, stroke by stroke. This fast-moving novel is rich with incident and wonderfully conflicted characters.”—James Magnuson, author of Famous Writers I Have Known

Suzanne Rindell is the author of The Other Typist. She has published her short fiction and poetry in Conjunctions (online), Nimrod, storySouth, Crab Orchard Review, and Cream City Review. Rindell lives in New York City.
Loading...
or support indie stores by buying on