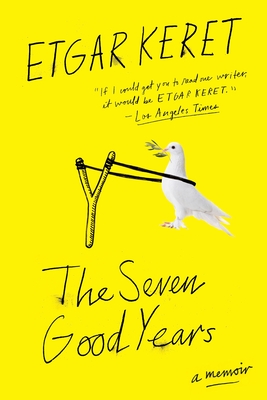 A brilliant, life-affirming, and hilarious memoir from a “genius” (The New York Times) and master storyteller. With illustrations by Jason Polan.

The seven years between the birth of Etgar Keret’s son and the death of his father were good years, though still full of reasons to worry. Lev is born in the midst of a terrorist attack. Etgar’s father gets cancer. The threat of constant war looms over their home and permeates daily life.

What emerges from this dark reality is a series of sublimely absurd ruminations on everything from Etgar’s three-year-old son’s impending military service to the terrorist mind-set behind Angry Birds. There’s Lev’s insistence that he is a cat, releasing him from any human responsibilities or rules. Etgar’s siblings, all very different people who have chosen radically divergent paths in life, come together after his father’s shivah to experience the grief and love that tie a family together forever. This wise, witty memoir—Etgar’s first nonfiction book published in America, and told in his inimitable style—is full of wonder and life and love, poignant insights, and irrepressible humor.

Praise For The Seven Good Years: A Memoir…

"A brilliant writer...completely unlike any writer I know. The voice of the next generation." —Salman Rushdie

“One of my favorite Israeli writers.” —John Green

“Etgar’s stories are a reminder of that rude intangible that often goes unspoken in creative writing workshops: a great work of art is often just residual evidence of a great human soul.  There is sweetheartedness and wisdom and eloquence and transcendence in his stories because these virtues exist in abundance in Etgar himself… I am very happy that Etgar and his work are in the world, making things better.” —George Saunders

“Terrific… As funny, as dark, and somehow as sweet as his fiction.” —David Remnick

“At once funny and profound, The Seven Good Years is a gem. Etgar Keret approaches memoir the way he does fiction—from surprising angles, with a sly wit, and bracing frankness. Read him, and the world will never look the same again.”  —Claire Messud

“I don’t know how Etgar Keret does it, but he can turn anything into a brilliant story. The Seven Good Years is full of them, and they happen to be true, and full of love, kindness, wisdom, humor and stuff I long for as a reader but cannot quite name. Keret’s writing is soul-healing.” —Aleksandar Hemon

“Being a father, having a father—Etgar Keret is the man in the middle and he captures the job just brilliantly.” —Roddy Doyle

“Hilarious, brilliant, poignant, magically economical in its language, marvelously generous in its approach to the world, this book is like its author: genius.”  —Ayelet Waldman

“When I first read Etgar's stories, I wondered what was wrong with him—had his mother smoked crack while pregnant? Was he dropped on his head as an infant?—until I met him, and grew to know him, and realized his problem was much worse than I had ever imagined: he is a terribly caring human being in a terribly uncaring universe. Basically, he's fucked.” —Shalom Auslander

"Etgar Keret is #1 writer in Israel and #2 in my heart (after my dachshund Felix).” —Gary Shteyngart

“Etgar Keret’s stories are funny, with tons of feeling, driving towards destinations you never see coming. They’re written in the most unpretentious, chatty voice possible, but they’re also weirdly poetic. They stick in your gut. You think about them for days.” – Ira Glass, host and producer of This American Life

“If I could get you to read one writer, it would be Etgar Keret. His impossible blend of humor and tragedy, cynicism and empathy as well as big-hearted narratives that occupy the tiniest of page counts make him one of my favorites. Maybe one of yours.” —The Los Angeles Times

“Exhilarating… For Keret, the creative impulse resides not in a conscious devotion to the classic armature of fiction (character, plot, theme, etc.) but in an allegiance to the anarchic instigations of the subconscious. His best stories display a kind of irrepressible dream logic.” —Steve Almond, New York Times

“[Keret’s writing] testifies to the power of the surreal, the concise and the fantastic… [O]blique, breezy, seriocomic fantasies that defy encapsulation, categorization and even summary.” —Washington Post

“It's astonishing what he can do in just two pages: go from funny to bizarre to touching to satiric to meta to surprising and surreal… [A] master storyteller, creating deep, tragic, funny, painful tales with scarcely more words than you've read in this review.” —Carolyn Kellogg, Los Angeles Times

"Keret’s writing is unwaveringly funny and light, making it the perfect easy read for a plane or train ride." —Vogue

"Spare wry… Without overplaying any single aspect of a complicated life in complicated times in a complicated place, Keret’s lovely memoir retains its essential human warmth, demonstrating that with memoirs, less can often be more." – Publishers Weekly (STARRED review)

“Etgar Keret's The Seven Good Years examines the absurdity, fragility and unpredictability of life… in true Keret style, it promises to be both poignant and uproariously funny.” —Chicago Tribune

“Keret’s unrivalled voice really shines, offering startling revelations, wry humor, and notes of grace…. [A] quiet dread sometimes seethes just beneath small moments, offbeat incidents, and strange dreams. Always on display is Keret’s astonishing capacity to transform even the pettiest of quotidian inconveniences (such as a delayed flight) into exuberant flights of fancy and realization. His voice is truly incomparable…. The Seven Good Years sparkles with humor and poignant wisdom, rendering wonderful immersions into Keret’s inner landscape, the gentle and deeply affecting ways that both strangers and loved ones stir his compassionate imagination.” – The Forward

“Keret’s deadpan tales, collected in such books as “Suddenly, a Knock on the Door” (2012) and “The Girl on the Fridge” (2008), often blur the line between the real and the surreal… This unusual perspective makes Keret’s new autobiography especially intriguing… the book brings together his engagingly cockeyed observations on a variety of subjects, from his disparate family to run-ins with cabdrivers and pushy moms at the park.” —Washington Post

“Keret calls it a memoir but it's really a TARDIS — a time machine that does two kinds of magic at once. First, it takes us back through seven years of Keret's history, showing us the world (its beauty, madness, and inescapable strangeness) through his sharp and sympathetic observations. It's not an overtly political book, but one defined by violence, bookended by life and death.” —NPR

"It’s no surprise that The Seven Good Years – Etgar Keret’s first foray into non-fiction – is extraordinary. Imbued with all of its writer’s familiar innocence, cynicism, wonder, nuance and insight, these essays – spanning a period from the birth of his son to the death of his beloved father – are, like his stories, very short, deceptively accessible, and utterly brilliant. It is a rare three-page piece that can move a reader to tears, but Keret does it without effort, and brings unexpected tears of laughter a moment later. Fellow polymath Clive James has called him 'one of our most important writers alive,' and it’s no overstatement. For fans of his five best-selling short-story collections, this latest offering will be a delight; for new readers, I can’t think of a better entrée into Keret’s work" —Francesca Segal, Jewish Chronicle

“A bittersweet memoir… captures the time between the birth of his son to the death of his Holocaust survivor father, years of contentment punctuated by air-raid sirens and jam 'sour with memories.'” —Vogue.com

“Reviewing Etgar Keret’s new volume of mini-memoirs poses something of a pleasant conundrum: What can you add to the reading world when you’ve just turned the final page of a book in which a writer has managed to say so much, so movingly, so concisely, and so entertainingly?...Keret brings the same surreal edge and black-as-pitch humor to these nonfictional musings as he does to his short stories… [His] writing exudes an intimate friendliness, as though he’s bantering with you, one-on-one.”  —Boston Globe

Etgar Keret was born in Ramat Gan and now lives in Tel Aviv. A winner of the French Chevalier des Arts et des Lettres, he is a lecturer at Ben-Gurion University of the Negev and the author, most recently, of the memoir The Seven Good Years and story collections like The Bus Driver Who Wanted To Be God. His work has been translated into thirty-seven languages and has appeared in The New Yorker, The Wall Street Journal, The Paris Review, and The New York Times, among many other publications, and on This American Life, where he is a regular contributor.