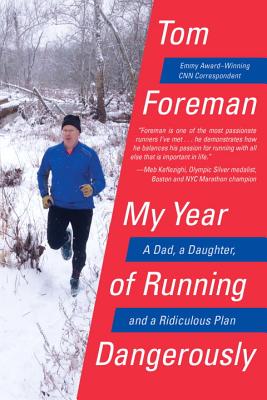 A Dad, a Daughter, and a Ridiculous Plan

CNN correspondent Tom Foreman's remarkable journey from half-hearted couch potato to ultra-marathon runner, with four half-marathons, three marathons, and 2,000 miles of training in between; a poignant and warm-hearted tale of parenting, overcoming the challenges of age, and quiet triumph.

As a journalist whose career spans three decades, CNN correspondent Tom Foreman has reported from the heart of war zones, riots, and natural disasters. He has interviewed serial killers and been in the line of fire. But the most terrifying moment of his life didn't occur on the job—it occurred at home, when his 18-year old daughter asked, "How would you feel about running a marathon with me?"

At the time, Foreman was approaching 51 years old, and his last marathon was almost 30 years behind him. The race was just sixteen weeks away, but Foreman reluctantly agreed. Training with his daughter, who had just started college, would be a great bonding experience, albeit a long and painful one.

My Year of Running Dangerously is Foreman's journey through four half-marathons, three marathons, and one 55-mile race. What started as an innocent request from his daughter quickly turned into a rekindled passion for long-distance running—for the training, the camaraderie, the defeats, and the victories. Told with honesty and humor, Foreman's account captures the universal fears of aging and failure alongside the hard-won moments of triumph, tenacity, and going further than you ever thought possible.

Praise For My Year of Running Dangerously: A Dad, a Daughter, and a Ridiculous Plan…

“Moving…emotionally rewarding…Foreman says that marathon running—or training even—remind you of the preciousness of every moment, moment after moment. …Of course, I’m also a sucker for the Daddy-daughter stuff in the book.”—Scott Simon, NPR Weekend Edition

“In Foreman’s witty and endear­ing chronicle, My Year of Run­ning Dangerously, we follow his transformation from self-described couch potato to marathoner, then ultra-marathoner. You don’t have to be a runner to understand—and feel—the blood, sweat and tears Foreman pours into his training and his first marathon with his daughter.”—Bookpage

“Tom Foreman has one of the most unique, interesting and honest minds that I've ever encountered in journalism. His book captures so much of what makes him such a pleasure to call colleague and friend. Despite the truly ridiculous amount of running he describes, this book is really about so much more: family, relationships, career, change, and ultimately about making it all fit. It may or may not awaken the hidden runner in you, but it will bring you along for his hilarious and moving journey.”—Jake Tapper, CNN

“Tom Foreman has an ability to capture honest humor while talking about something as horrible and painful as exercise. I loved everything about this book except the running.”—Jim Gaffigan

“Foreman demonstrates how he balances his passion for running with all else that is important in life. I’ve interacted with thousands of runners throughout my career and I can say that Tom is one of the most passionate runners I’ve met.”—Meb Keflezighi, Olympic Silver medalist, Boston and NYC Marathon champion

“As a—don't laugh—basketball player, I understand full well Tom Foreman's mad desire to exert above his age. But his recital of the perils of long-distance running made me decide that turning the pages of this graceful and amusing saga was enough exercise for a summer day. Run—but only to your bookstore.”—Harry Shearer

"Even the author's long-suffering family had to admit at the end of the season that he was happier, and readers will enjoy running alongside him."—Kirkus

Tom Foreman is an Emmy award-winning journalist and currently works as an anchor and reporter for CNN. He frequently reports for such programs as The Lead with Jake Tapper, The Situation Room with Wolf Blitzer, and Anderson Cooper 360º. A journalist for over 30 years, Foreman has covered nearly every major news story in recent memory, from 9/11 and Hurricane Katrina to the 2008 presidential election and the Gulf oil spill. He currently lives in Bethesda, MD with his family.
Loading...
or
Not Currently Available for Direct Purchase