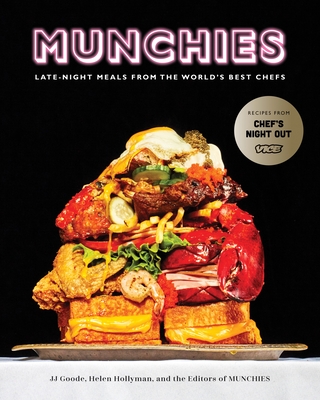 Late-Night Meals from the World's Best Chefs [A Cookbook]

This cookbook, based on the game-changing web series Chef's Night Out, features stories of the world's best chefs' debauched nights on the town, and recipes for the food they cook to soak up the booze afterwards.

MUNCHIES brings the hugely popular show Chef's Night Out (on VICE Media's food website, MUNCHIES) to the page with snapshots of food culture in cities around the world, plus tall tales and fuzzy recollections from 70 of the world's top chefs, including Anthony Bourdain, Dominique Crenn, David Chang, Danny Bowien, Wylie Dufresne, Inaki Aizpitarte, and Enrique Olvera, among others. Then there are the 65 recipes: dishes these chefs cook when they're done feeding customers, and ready to feed their friends instead. With chapters like "Drinks" (i.e., how to get your night started), "Things with Tortillas," "Hardcore" (which includes pizzas, nachos, poutines, and more), and "Morning After" (classy and trashy dishes for the bleary-eyed next day), MUNCHIES features more than 65 recipes to satisfy any late-night craving and plenty of drinks to keep the party going.

Praise For MUNCHIES: Late-Night Meals from the World's Best Chefs [A Cookbook]…

"The accessible recipes in this witty and fun book will satisfy cravings, day or night."
—Publishers Weekly

"With over 65 mouthwatering recipes, you'll never have a late-night craving left unsatisfied."
—Domino

“MUNCHIES has a beautiful premise: you get to see not only what chefs actually like to eat late at night, at the end of a long shift, but also who they are. . . . In this cookbook, you’ll find recipes that are expressions of these moments, when some of the world’s best cooks channel their toil and liberation on a plate.”
—Mario Batali, from the foreword