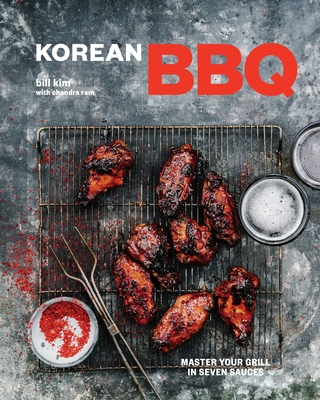 Master Your Grill in Seven Sauces [A Cookbook]

Born in Korea but raised in the American Midwest, chef Bill Kim brings these two sensibilities together in Korean BBQ, translating Korean flavors for the American consumer in a way that is friendly and accessible. This isn't a traditional Korean cookbook but a Korean-American one, based on gatherings around the grill on weeknights and weekends.

Kim teaches the fundamentals of the Korean grill through flavor profiles that can be tweaked according to the griller's preference, then gives an array of knockout recipes. Starting with seven master sauces (and three spice rubs), you’ll soon be able to whip up a whole array of recipes, including Hoisin and Yuzu Edamame, Kimchi Potato Salad, Kori-Can Pork Chops, Seoul to Buffalo Shrimp, BBQ Spiced Chicken Thighs, and Honey Soy Flank Steak. From snacks and drinks to desserts and sides, Korean BBQ has everything you need to for a fun and delicious time around the grill.

Praise For Korean BBQ: Master Your Grill in Seven Sauces [A Cookbook]…

“Bill’s book is not only filled with great, authentic recipes, but it also tells the journey of how a classically trained cook in search of his heritage became an accomplished chef elevating and refining his own cuisine. In his recipes, you’ll find the best of Korea’s most mystifying sauces, vinegars, rubs, and infusions in a very approachable and delicious way to be understood by any home cook. It makes me want to invite myself over to Bill’s house for dinner!” —Daniel Boulud, chef/owner of The Dinex Group

“Bill Kim's restaurants are, hands down, my favorite local places to eat. It's not just the food (which is always great), it's the service. The hospitality. As you see in this book, Chef Kim is all of us. His food as well as his story go a long way to showcase that. Made with equal parts love and soul, you'll always leave with a full belly and a smile on your face. Being different is good AND delicious!" —CM Punk, mixed martial artist

“It’s impossible not to fall in love with Bill Kim, and of course his outrageously delicious food! With Korean BBQ, Bill shares a little of the magic that makes his imaginative Korean-American cooking so special. Filled with drool-inducing recipes and infinite ways to combine them, as well as life stories more relevant now than ever, he’ll make you want get in the kitchen, stir up a spicy, fragrant new sauce, and get grilling!” —Gail Simmons, food expert, TV host, and author of Bringing It Home

Award-winning chef Bill Kim got his start in the restaurant industry and honed his culinary skills at world-renowned establishments Charlie Trotter's and Le Lan. Chef Kim would eventually venture out on his own in 2008, bringing his imaginative Asian-inspired cuisine to his highly acclaimed Chicago restaurants Urbanbelly, bellyQ, and Belly Shack.

Chandra Ram is the editor of Plate magazine.
Loading...
or support indie stores by buying on