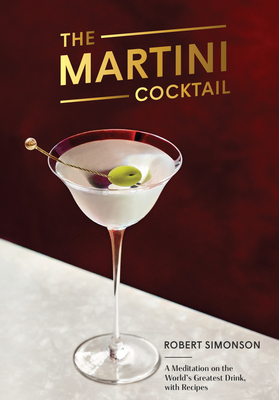 A Meditation on the World's Greatest Drink, with Recipes

The first book in decades to celebrate and explore the history of the most iconic of classic cocktails, the martini, with 50 recipes.

JAMES BEARD AWARD FINALIST • WINNER OF THE TALES OF THE COCKTAIL SPIRITED AWARD® • IACP AWARD FINALIST • “Simonson’s a fleet-footed writer, and his thumbnail history is easily satisfying without getting into the weeds. . . . This is a no-brainer for martini enthusiasts.”—Publishers Weekly

A classic martini includes gin, vermouth, sometimes bitters, a lemon twist or olive, and lots of opinions—it’s these opinions that New York Times cocktail writer Robert Simonson uncovers in his exploration of the long and tangled history of the classic martini and its subtle variations. The book features examples of age-old recipes, such as the first martini recipe published in 1888, modern versions created by some of the world’s best bartenders, and martinis sought out by enthusiasts around the world, from Dukes Bar at the Dukes Hotel London to Musso and Frank Grill in Los Angeles. In The Martini Cocktail, you’ll discover everything you need to know about what components make a great martini, as well as a collection of 50 recipes to create your own drinks (and form your own opinions) at home.

Praise For The Martini Cocktail: A Meditation on the World's Greatest Drink, with Recipes…

“[The Martini Cocktail] delves into the drink’s fascinating history and faux histories, its spinoffs, the evolution of preferences around gin vs. vodka.”—The Washington Post

“Easy-reading gusto. It covers all the bases you want it to, including origin stories, recipes and the Martini’s place in popular culture.”—UrbanDaddy

“The book is as beautiful as it is insightful, and Simonson does an excellent job of tracing the obscure roots of the Martini and offers a well-rounded collection of both historic and modern recipes.”—Imbibe magazine

Robert Simonson writes about cocktails, spirits, bars, and bartenders for the New York Times. He is also a contributing editor and columnist at PUNCH. His books include The Old-Fashioned, A Proper Drink, and 3-Ingredient Cocktails, which was nominated for a James Beard Award. He was also a primary contributor to The Essential New York Times Book of Cocktails. His work, which has appeared in Saveur, Bon Appétit, Food & Wine, New York magazine, and Lucky Peach, has been nominated for a total of eleven Spirited Awards and three IACP Awards. A native of Wisconsin, he lives in Brooklyn.
Loading...
or support indie stores by buying on